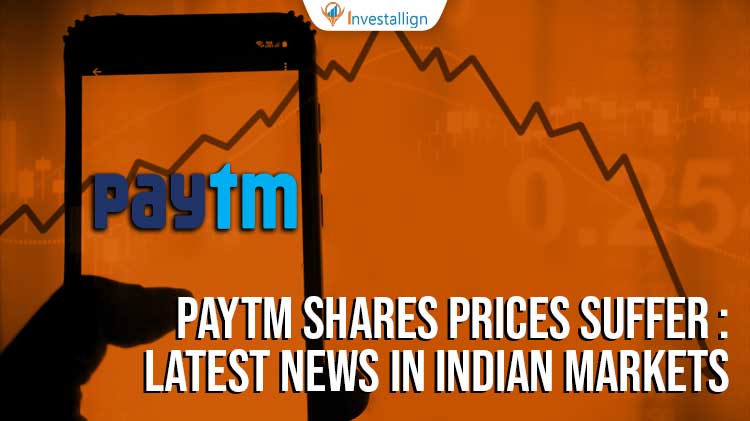 Paytm shares have been in the news since its listing. The company has been listed at the NSE and BSE at 2150 Rs as the IPO price. However since the listing it has never achieved the level of 2000 Rs as well. The company has been suffering from constant devaluation due to one reason or another. Sometimes it’s the market trend and other times its bad results or insider news from the company. Paytm or One97 Communications Limited is a company founded in 2000 and the CEO of the company is Vijay Shekhar Sharma. Its headquarters are in Noida and it employs more than 18000 people. The One97 Communications Limited is the major company having subsidiaries named as Paytm, Paytm Money Limited, Paytm E-commerce and many more.

The company ended the last session at 546.60 Rs and was up by 1.22% on 18th November, 2022. Its market capitalization as of now is 4.35 Billion Dollars. The company has suffered 68.14% reduction in its valuation since the listing. Also it ranks 2532 in the list of the most valued companies by market capitalization. The highest valuation of the company was witnessed on 27th November, 2021 at 15.43 Billion Dollars.

The company recently suffered a loss of 10% in its valuation in one single session. This was because of the sell off news triggered from SoftBank which is one of the major promoters of the company. SoftBank would release 215 Million Dollars worth of shares as per the reports of Reuters. The shares will be sold in the price range of 555 Rs to 601.45 Rs. The sale would be done through a block deal. SoftBank owns a 17.5% stake in the company. The sale is a part of the latest disinvestment decision taken by SoftBank after its subsidiary Vision Fund Unit made a loss of 50 Billion Dollars in the last 6 months.

The sale from SoftBank will be for 29 Million Shares. This is also due to the lock in period expiration of the company’s promoters. SoftBank has been on a mission of selling its investments and this was previously done when it sold shares of T-Mobile and raised 2.4 Billion Dollars.

Current News in The Company

The recent sell off in the company is a major blow for the investor’s confidence in the company as the news has just hit the market post the lock-in expiration. Currently the price of the share is seen sliding below 400 Rs as per the analysts. The stock can be seen testing the all time low of 510 Rs per share. On the day of 10% fall the company saw an exchange of 38 Million shares and SoftBank was expected to sell 29 Million Shares among that volume.

The company is expected to test the 510 Rs all time low in the upcoming days. Also if that price point is broken one can expect a 20% devolution in share price further on. This is because of the bear grip on the share. The Lock in period expired in Paytm on 16th November and the devolution in sarees triggered post the sale made by SoftBank. Hence investors are already cautioned on the company stability of share pricing.

The company has disbursed 3.4 Million loans in October and this is a 160% growth in the same. The total loans disbursed are worth Rs 3056 Crore. The company has received a thumbs up from Morgan Stanley, Goldman Sachs, JP Morgan, CITI, Research Themes and Dolat Analysis for the further growth.

The company has been posting better financial performance on one hand and on the other side SoftBank being one of the major promoters has triggered a sale. This has shaken the investors’ confidence in the company. The reason being the initial investors have already suffered a loss of 68% in the valuation of the company. Also at the current valuation major investment banks are assuming a strong growth for the company ahead. Apart from this with the current pricing near the all time low an investor is already afraid for further downfall of 20% more. On the other hand the current prices seem fair for averaging out the portfolio valuation regarding the One97 Communication shares holding.

Hence this is an absolute dilemma for the investors as the company showed a good run recently reaching 900 Rs within a short period of time. Hence the investors are in a dilemma to make a decision regarding their holdings in the company.