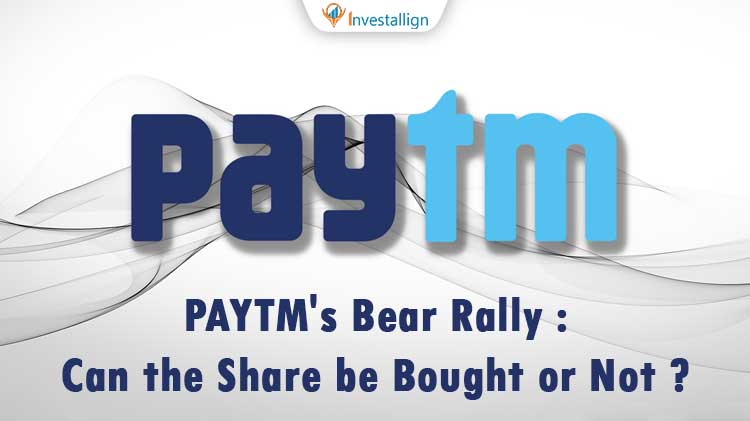 Paytm is one of the most advanced companies in today’s time. The reason for terming it advanced is that it has penetration in almost all the segments of consumer usable products. The Paytm app offers one in all solutions to its users. Its product disbursement channel ranges from shopping to ticket booking, from payment gateway to insurance and from equity trading to mutual fund investment. Hence the company provides all the consumer useful products to its users and all this is possible within one single application.

The PAYTM IPO was one of the biggest IPOs ever launched in India. There were 2 major surprises at the time of IPO launch. First one being that it was so known and preferred by investors that the IPO was subscribed 1.9 times. Thus meaning that it would be listed at robust gains. The assumption for higher gains was obvious due to the IPO rally going on in the Indian equity markets. However no such result was availed by users. This was the second biggest surprise. The share did not get listed at premium. Not only that it was listed at a discount price of 9%. Thus the IPO valuation for share which was 2150 Rs is never visible for the investors.

The share price of Paytm listed it all time low of 1000 Rs (54% lower than listing price). This was a shock for the investors as the share was constantly facing a downturn with 4 to 5% lower prices everyday. This eroded the wealth of investors by 20% in one single week. This did not only cost market cap loss to the company but also took away the belief of investors from the forms. However the company has been able to post strong loan disbursement figures in return. The company has given out loans amounting to 2180 Crore Rs in comparison to 470 Crore Rs earlier. This gave investors some hope that the estimated figures of the company can be trustworthy.

Yes, the company’s CEO Vijay Shankar has said in an interview that the revenues of Paytm are estimated to grow by 60% every year. Also the estimated future growth of payments down through paytm would increase to 140 Million dollars. However by the end of this quarter the company has given a figure of 100 Million dollars for investors. These are some reasons why investors have stood behind the company even after 54% wealth erosion from the IPO price.

The bear rally was a result of the company’s profit drought since its inception. The other major reason associated with the same is the market downfall toward 16400 levels. This not only posted a negative impact on the company but also caused a major market capitalization loss to it. The GMV’s increase for the company has caused some relief for the stakeholders in that phase.

Last week’s menace was caused due to the company’s bold decision of shutting down its Canada operations. The company’s Paytm application of Canada will be shutting down due to its eroding market capitalization. This is a tough call for the company but it would be applicable from 14th March, 2022. The company has appealed to all its users to take back their back from the wallets and even redeem the points through cash back or gift cards. Hence the operations will be shut down by the end of this quarter, This came as a bold decision from the company. The company’s board said that the major focus would be shifted towards India as growth is noticed into loan disbursals from the company. Hence immense market share is possible to capture in the India domain.

Addressing this point, the company’s CEO even compared the Paytm loan disbursement wing to Bajaj Finance. The company aims to create its impact similar to Bajaj Finance and hence capture the market share in the upcoming decade.

Can the Share be a Good Pick for the Future ?

If we notice that the share rebounded from it’s all time low of 1000 Rs the very next day. The jump was 8% or 84 Rs. This caused a major relief among the investors but the destination is yet too far. The company’s future looks bright given its product portfolio. If we notice then Paytm has a tough competition in all the segments it has entered. Even the primary segment which it was famous for (merchant Payments) has seen a major penetration from PhonePE and Google Pay. Thus the company is facing strong competition from across the markets.

There are only two possibilities in front of me right now. The company can be one of the biggest market players in the upcoming time given its penetration in various fields. The other possibility is the exit of a company from the majority of business due to such a huge disbursement and chances of failures in multiple business streams. Managing all the businesses at once is a difficult task and can drain rescues from the company. However if it survives this challenge it will definitely be one of the best companies India will ever get till date.