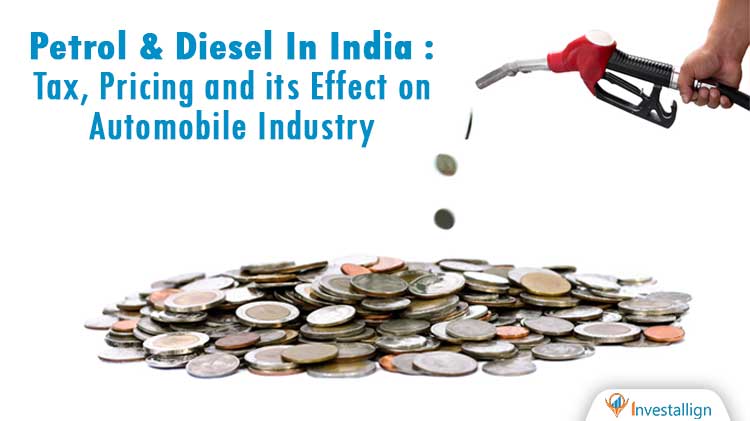 Petrol and Diesel are both by-products of Crude Oil. Their pricing is directly related to the price changes in crude Oil. As everyone knows that the crude prices went negative in the COVID peak time in the initial stages. The major reason was running out of storage space for the same. From the Situation till now in mere 3 years the Crude Prices have hit all time high. This is one of the major reasons why the prices of petrol and diesel are increasing at such a rapid pace. There are other important factors such as Tax Rate and Commission form Dealers. These are the reasons why the pricing for petrol and diesel have increased so much.

On the other hand the prices have been raised to tackle the problem of petrol and diesel driven vehicles. The government wants to promote electric vehicles to shift towards a more renewable and pollution creation mode of energy. Also the Electric vehicles are cheap in the long run given their low cost for charge. Hence the increase in price will directly trigger a consumer to move towards such electric vehicles.

Pricing of Petrol and Diesel

Excise duty + VAT are the main taxes applied on Petrol and Diesel Prices right now. Excise duty is charged by the central government. This part of tax directly goes into the revenue sheet of the government of India. On the other hand the VAT goes into the pockets of the state government. Like the Central government the state also charges some amount for the Petrol prices and diesel prices. Also the major reason for the increased pricing in India is specifically the taxes applied.

Excise Duty charged by the government for Petrol is approximately 28 Rs and For diesel it is 22 Rs. The original cost for petrol and diesel is 39 Rs each. However after the processing the costs increase to 48 Rs and 49 Rs respectively for petrol and diesel. This simplifies the percentage that the central government charges for obtaining petrol. The cost is close to 50%. Hence for obtaining one litre petrol an individual pays more than 50% of tax in form of excise duty.

On the other hand the VAT charges by the state government ranged from 6% to 39%. 6% being the VAT in Andaman and Nicobar Island and the highest being in Maharashtra at 39%. The central government is constantly urging the state governments to decrease their tax rates so that the consumers can get a low cost fuel for vehicles. However at the end of this cycle we have the petrol pump owners who charge commission of 2 to 3 Rs per litre. Hence after all this the fuels are received by General public. The government charges more than 200% tax on the fuel and hence the cost is increasing so rapidly. This is also one of the reasons why the government is not imposing GST on petrol and diesel.

The price for Crude Oil is almost 80$ per barrel. This gives the price per barrel close to 5940 Rs as the exchange rate is 74.20 Rs per dollar. Now one barrel contains almost 159 Litres of crude. Thus cost per litre of crude is 37.35 Rs per litre. In its comparison the price of petrol currently in Ahmedabad is 95 Rs. and that of Diesel is 89 Rs per litre.

This equals to almost 225% of additional charge applied above basic prices on petrol and diesel. Thus the individuals suffer highest exploitation in this resource.

There is a direct impact of the fuel prices on the sales of Automobile industry. Nowadays due to the infusion of electricity driven vehicles people are switching towards them. Also currently in India there is not much variety available for the electric vehicle fleet. Hence one cannot get varied choices for the same. This is the reason that people are currently shifting towards CNG more. Now the prices of CNG have also increased on the other hand and due to this price hike transportation has become costlier. This has caused major inflation in the Indian Economy.

Today all the goods and services are available at 15% more price than previous rates. However talking about the automobile industry the sales have gone down drastically in numbers. The quarter results have definitely shown some progress but it is due to the comparison with last quarter which was a total disaster due to the COVID wave.

The market leaders in automobiles predict that the future for fuel driven vehicles has almost ended and also the price for teams will keep on increasing and the demand will see a drastic downfall in the year to come. Hence one can expect the electric vehicles to take over.

This shows how drastically fuel has its effect on the mindset of the common people. This can be a trigger to the automobile companies to start manufacturing their electric vehicles or else they will go out of work in the next few years to come.