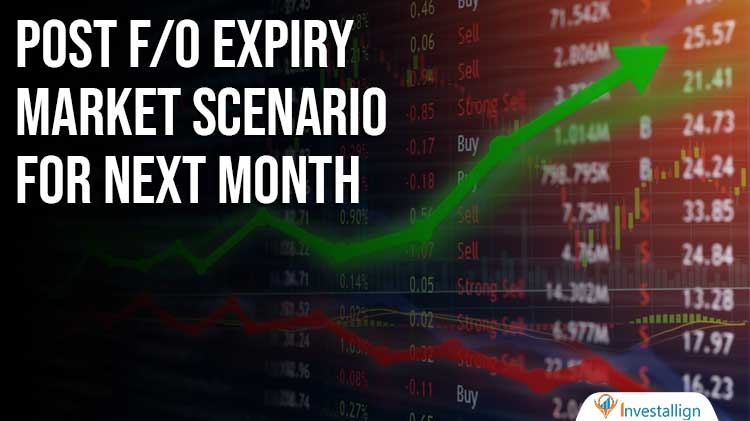 The Indian Index is in a really great place right now. The markets are booming to breach the current all time highs. The bulls have correctly overtaken the market rally in the current scenario. The reason is the breakout of the Nifty50 index above 18000 Levels. In today’s market rally we saw the HDFC Twins performing which have been under pressure since a long time. However the Bank Nifty support proved to be handy and gave market hopes for seeing new all-time highs. The expiry has been overwhelming for the Indian markets this time around. The reason is maximum conversions were seen this time around. Though people were afraid the war may worsen the situation or the spread of COVID in China may create fear, the position’s conversion was noticed.

The most positive note for this time of F/O expiry was the worst had already been left behind. In other words the war between Russia and Ukraine has been settled up. Also the Chinese COVID is on rise but it is not affecting the Indian markets largely. However one needs to be cautious about the same. If no obstacles come in between now then it can definitely be expected that markets can give a drastic bull run one more time. As per the predictions, many firms are predicting for Nifty50 to reach 21000 Levels and beyond in a very short span of time.

Markets have been volatile lately, but the volume has always tended in favour of the green zone. Yes, the volume is shifting towards buying zones and people are vigorously buying many stocks and conglomerates’ shares which is the reason behind such a drastic recovery in Nifty50.

Adani Shares have been in the limelight since the expiry week. The shares of Adani, mainly Adani Wilmar and Adani Power, have increased more than 30 to 40 % in just 2 weeks. This comes after the volume in such shares have almost reached the highest. The trades in Adani Power have been executed even at the all time high of 160 Rs. The situation is great for Adani Power currently as it is currently trailing at 210 Rs.

Also Adani Wilmar is breaching its all time high every day in the last 4 trading sessions. Adani Enterprise and Adani Green have been the top notch performers in terms of gains achieved. Thus every Adani Stock has achieved handsome returns and is expected to have the same going on for the next 1 or 2 months.

The cement sector was under constant pressure in the previous market fall. The best stocks such as Ultratech Cement and Shree Cement lost a major chunk of their early bull run gains. Thus the cement industry was suffering. Even Reliance lost a handsome amount of gains to bear the result of the Russia and Ukraine Crisis. Reliance as a conglomerate has grown by almost 300 Rs and more. This has put the stock back into forward gear. Also the cement stocks haven’t been able to gain as per their losses. However they have made a head start to reach their pre bear run levels. Thus the entire market on whole is advancing forward.

Bank Nifty has fairly been compensated in today’s market. The HDFC twins succeeded in giving a boost to the financial segment. The Bank Nifty rose for a record gaining 1500 points. The current Bank Nifty level is 38600 Points. This is remarkable given the downfall of Bank Nifty beyond 34000 Level. The current momentum in the financial segment is obviously due to HDFC Twins but alongside them we have Bajaj Brothers as well. One can also not forget the IndusInd Bank, Axis Bank and ICICI Bank giving strong support to Bank Nifty.

Also the last but not the least Kotak Mahindra Bank is the all time supporter for the Banking gains. The current run is the mere effect of Bull Rally and lost momentum. If the momentum continues the Bank Nifty can soon be seen at 50000 Levels.

Economy of India and Markets

One can never ignore that the petrol prices are above 100 Rs again. The prices had dropped just as a political move as it seems people’s opinion. However the crude prices and petrol prices continue hampering the daily goods requirements. One can also not ignore the fact that the rumours of Chinese attack on multiple countries are spreading daily. Also instability in politics is seen in neighboring countries such as Pakistan and Sri Lanka.

Amongst all such desperate reasons for market downfall Indian markets have managed to pull off a brilliant bull run. The only hope now would be breaking 18600 levels soon. Once this happens there is no obstacle till 20000 Level of Nifty50. The Indian markets are in a great spot currently and one cannot expect anything less than a full fledged bull run in near term.