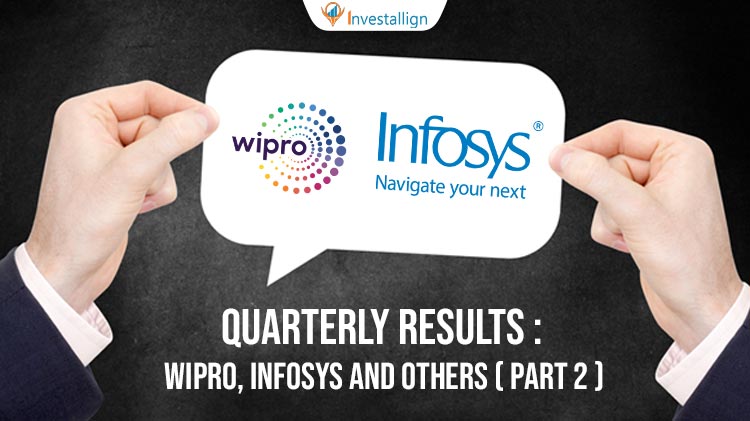 Quarterly Results being one of the most important events of the year decode the movement of any company’s stock price. The reason is the major influence of retail investors in the market nowadays and even the FII and the DII shift their positions based on their goals and targets set during the course of investment in a particular company or segment. However we need to focus on the daily result news and the latest ones in place are Infosys, Federal Bank and Wipro. The top I.T. companies have posted their results just after TCS posted good quarterly results if we keep aside the margin factor.

Hence with a mindset laid out by TCS one can imagine that the Tech segment is currently on the rise again after the slump in valuation due to the economic slowdown across the world. The reason behind this is very simple. The major I.T companies India have a major amount of Offshore clients which bring in huge amounts of revenue. Such revenue was missing since the foreign countries were facing recession or high amount of inflation due to the previous events happening across the globe.

Even the Indian markets are heavily reliant on the tech companies for a strong comeback due to the high amount of valuation percentage of Nifty index by the technology sector. Hence lets decode the results of the major I.T companies in India alongside the banking segment stock federal Bank.

Being one of the most grossed information technology companies in India, the company has generated a substantial amount of revenue at 23229 Crore Rs. It was up 14.36% compared to last year’s quarterly results. The same for the previous year was 20313.6 Crore Rs. The profit of the company for the previous year’s quarterly results was 2969 Crore Rs which was up by 2.82% to 3053 Crore Rs. The result estimates of profit beat the street estimates which is a good sign for the company.

The company has been in the radar of major investors due to its starting quarterly results. Its profit beats the estimates of Dalal Street and stood at 6586 Crore Rs which is 13% higher than the previous recorded profit on a quarterly basis. Its revenue recorded was 38313 Crore Rs which was higher by 20.2% than the previous quarterly results. The attrition rate of the company declined to 24.3%. Many analyst companies have made a target for Infosys to price around 1800 Rs in a short period of time. This is majorly due to the buyback procedure carried on by Infosys at 1850 Rs per share.

Infosys is the second largest I.T firm of India. It is one of the most progressing firms in recent times. Hence many analysts are preferring this company over the giant TCS due to the advancement and return expectations in the longer run. However the Information technology sector has been returning back to its lost position again at a slower pace. This identifies clearly that the markets are going to be back on route soon if no other drastic situation hits the economy.

Also the current wave suggests a major boost reused for the indices to move past the range boundation and even achieve the all time highs. In order to fulfil this the Bank Nifty has already been priced in at a higher valuation and the only segment that could help to push the indices ahead is the Information technology segment. The reason is the segment is beaten by a 30 to 40% price devalution due to COVID and Russia-Ukraine situation. Hence a good result of the I.T. companies means a good positive way ahead for the Indian Markets.

In a shocking result the federal Bank has gained a 54% hike in profits which comes to 803 Crore Rs from 521 Crore Rs on a quarterly basis. The net interest income increased by 27.1% and Income from other sources increased by 10%.3%. The same were 1956 Crore Rs and 534 Crore Rs respectively. The company also reported that it has increased its quality of NPAs and the net interest margins have also increased. The gross NPA of the company were recorded at 4147 Crore Rs from 4400 Crore Rs on quarterly basis. The current pricing of the bank is at 142.5 Rs per share.