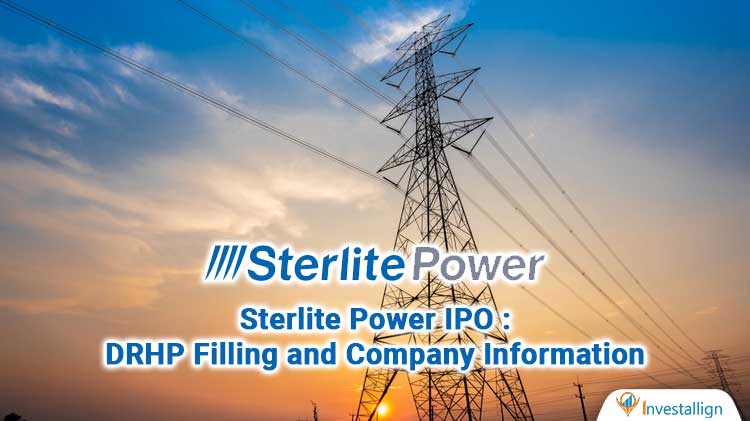 The company has been a part of the giant group VEDANTA. The promoter Anil Agarwal has set the primary business lines for POWER as Infrastructure creation for the world and providing solutions for the same. The Power infrastructure firm has its strong competitor in the name of Adani Transmission.

Sterlite Power has three bases for its entire working pattern. The first one is Capital, second being space for creation of infrastructure and third one is Time. The company provides infrastructure through capital intensive and cutting edge technology which can save time and energy. Hence it focuses on saving and utilizing productively three major factors (time, Capital and Space). Being a power transmission company the major issue always lies in the safety of the personnel. The company makes sure that every workman goes through intensive training and mandatory tests and practical runs before going for an on field job. It ensures the safety of its employees and makes it its priority. Hence the company has strong ethical and moral values.

The company has recently filed the DRHP with SEBI. It seems clear that it will get a nod soon from the institution as well. The reason behind it is the backing of its giant group VEDANTA.

Sterlite Power is a subsidiary of the giant VEDANTA. The Vedanta company is extremely famous due to its latest delisting failure. The company went for a delisting proposal but the shareholders declined it with majority and hence the process failed. However the promoter Anil Agarawal is the key promoter of Sterlite Power. The company has put forth a request to raise close to 1255 Crore Rs from its IPO. The IPO is set point to be fully equipped with equity issue of shares. That means no Offer for Sale is possible in this case.

Also the company has set aside some portion for its employees to subscribe in this equity share issuing process. Sterlite Power wants  to raise some money PRE-IPO launch and hence the company aims to raise almost 220 Crore Rs from Pre IPO launch. If the same is completely subscribed then the part of raising money from public issues would get cut down.

The company has appointed its lead managers. They are JM financial, ICICI Securities and Axis Capital. The IPO money is planned to set off the company’s borrowings. Hence settling the debts is the primary purpose for launching the IPO. Some other corporate expenses can be led by this IPO money as well.

The company has recently started its operations in 2015. Since then it has picked up several projects across the world business groups. The company has commissioned many projects such as the RTCL project or the Jalandhar – Samba line which was a part of the NRSS-XXIX work.

The company has also been an investor into the Sharper Shape INC. which is a Finland based firm. Since 2016 it has merged with its other partner Sterlite technologies and then later on went ahead to set up an INDIGRID which is also referred as Infrastructure Investment Trust. The company has also won major bids for the Vineyard projects across Brazil. In the next year itself it won a bid in Brazil regarding the NOVO ESTADO work. It is an interesting fact to know that the units of INGRID of Sterlite Power are listed on the exchanges.

Sterlite Power has also undergone many merger and acquisition plans. The 2018plan of acquiring 28.4% stake in SPGVL was an outstanding plan. It is now a part of VEDANTA GROUP and Sterlite power. It also won the Pampa Project in Brazil along with six other projects. Hence it is clear that the company has major international business in the Brazilian Domain.

The company is betting on its OPGW technology. It believes it is a gam charger for the years to come. It is Optical Ground wire which runs on the high voltage transmission lines. Sterlite Power possess OPGW technology which has the ability to  reach the data centres quickly to provide the best fibre connections. In a world where people are shifting towards using the virtual mode of work, such a solution can change the way the current corporations and states work. Thus the OPGW technology can provide Sterlite Power with massive profit generation in future times.