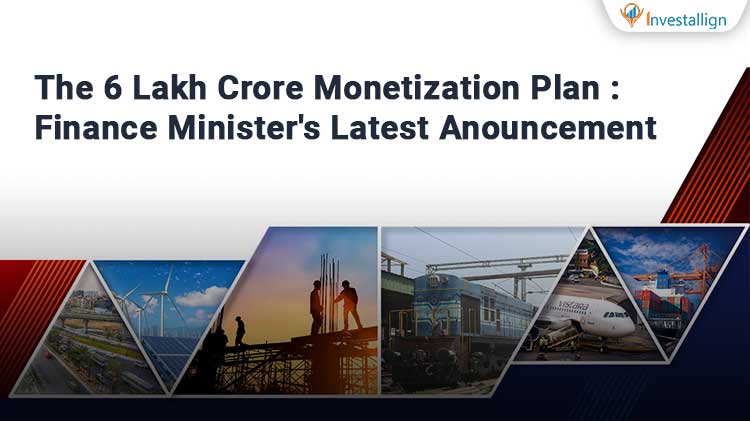 The latest announcements from the center come forward in the monetization name. The word monetization scheme is related to generation of cash from the stressed or possess or profitable assets held by an entity. One can rent, sell, give to a third party for administration or maintenance etc. the assets and generate the profits. This way the profit gets shared and the responsibility on the owner gets distributed. This is the exact plan of what the government wants to do in the future for the days to come.

If we think in reality then most of the assets possessed by the government are under the stressed category. This means that major ones , be it companies or organizations or assets, are running in losses and the government has to however maintain them in the name of public service.

The Indian government has been under so much stress lately that the prices have been rising for every standard basic good. This means that the inflation rate is rising as the government is not able to cope up with the tax revenue and wants to generate more liquid outflow and cash flow. This is the reason for increased tax rates on petrol and diesel. However all of this along with the monetization plan has only one single motive : Generation of cash for the government.

Currently through the plan that has been announced the government wants to monetize its assets. Railways or roadways or any highways or major companies by selling stake to private sectors or leasing them to private sectors. The plan is aimed to get executed before 2025. As per the statement presented by the FM of India, the government has identified all the assets it wants to mention under the list of monetizing and will soon start working on the same.

The government has incoming payments of multiple leases and bonds in the petroleum segment. With that the COVID situation has stopped the profits and incurred more losses. The tax collection has also been minimized due to the same. Hence the plan for financing from government assets is considered. As much valued government assets are, it would be better if they are handled by the private sector. The reason is the government has never been a leader in running the companies without exceptional monopolies. This is also a reason why the Government wants to bring in the LIC IPO. Thus privatization of government companies or monetizing them by sale of stake in percentage or lease is the actual plan here.

Why Such and Immediate Plan ?

One would say that the government is in desperate need of funds. This is not very pleasing on the part of the government. The reason is once the plan for monetization starts there will be loads of employment structure changes into multiple companies. This will also lead to a higher amount of corruption based on the reputation of Indian ministers. Till date no one does not have proper knowledge as to where the PM Cares funds are used. Through this monetization plan as well one cannot oversee whether the funds are used in the benefits of the public. Hence the lack of information is one of the major reasons why one should be worried about the government’s plan.

What is The Government’s Plan ?

The Indian Government plans to develop the infrastructure facilities available in the domestic markets. The reason is the government sees a lot of potential in the future of Indian land. Various MNCs from the world can use the cheap labor to set up their offices and production plants in India. Already the software industry is developing. Given the development of it the manufacturing line is at the verge of expansion.

The MNCs such as Apple have established their assembly lines and production and manufacturing plants in India given the diversity and variety of Indian markets. In the recent news one can know that Tesla got the approval for launching 4 of its Automotive fleet in India. This is nothing else than a bright future for the Indian employment segment. However fascinating it seems one should be keeping a close eye on the usage of all the money that the government would receive. The monetization plan is brought up to develop the Indian infrastructure and hence the objective needs to be fulfilled.

If the same is not done then it would be a great loss o n the behalf of the government. The major income of the government comes from taxes. Hence through developing the infrastructure the government wants to accumulate more taxes through new establishments. Also by selling stakes in the companies the government owns, the burden of losses would go down and the chances for improved functioning may be possible.