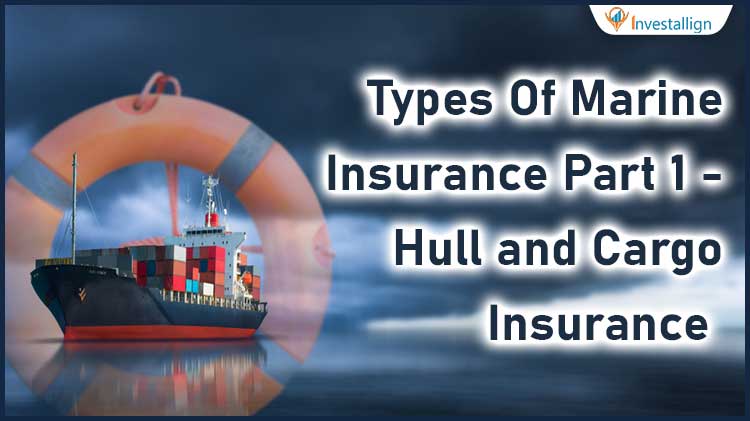 The origins of the marine insurance industry are found in Greek and Roman. The concept of maritime loan was the foundation of marine industry there. Around the 14th century in Genoa insurance contracts were entered into. Later on it spread across Northern Europe.

The LLOYDS of England were the ones who initiated the Marine insurance business. Their location for the business was LLOYD’S COFFEE HOUSE. The reason for initiating such a business was the increasing rate of industrialization.

This led to need for some assurance if the ships did not reach the shore and got damaged or sunk during their voyage.

The LLOYDS and Institute of London u/w came together in the end of the 18th century and created clauses for marine insurance which are applicable even today.

Marine insurance ensures the insurer of coverage of his losses in case the ship, cargo, freight and liability are damaged or sunk or the contract is not obeyed.

The major types of marine insurance are :

It covers the goods insurance that is carried on the ship. This insurance caters to protect the ship owners against the loss occurring from goods and services on the voyage.

It covers the losses occurring from the money lost while transporting the cargo. Hence it is the profit lost due to some damage to cargo.

Features of an Insurance Contract

As mentioned above hull insurance is related to vessels carrying cargo which includes the ship, propellers system and navigation system.

Ship that is a vessel is the main body or the main boat or fairy on which the entire journey is done.

Propellers are attached at the bottom end and they are fan-like structures which are essentially important.

Cargo insurance is related to the cargo which is laid on the ship and transported for the cause of freight and trade. As mentioned above it can be stated that it protects the interest of cargo holders in case of any negligence by crew or any other sea peril or catastrophic events. It is the lifeline of marine insurance as most of the part of marine insurance is covered by cargo. Cargo eliminates a major financial burden from the marine industry. The coverage is necessary because of many rules about the ship’s liability. Cargo insurance covers loss from specific Even the place where the cargo is stored decides the amount of coverage whether it is the deck or the storage (below deck). Hence many factors play a role in marine insurance. Perils covered usually include:-

If the cargo arrives late or the delivery is not done if in both cases there is a loss to the holder it would be reimbursed.

Floating policy – In this kind of policy the only thing mentioned is the amount of insurance. The cargo carried or not is not at all mentioned. Also all the other details are omitted. This type of policy is feasible for frequent travellers.

Open policy – This policy has a very unique feature. Here the amount of ship or consignment is not at all described. The amount is taken into note once any incident or loss happens. Inspection is carried out and the ship and its cargo are valued and reimbursed.

Block policy – The policy has multiple usage. It covers every cargo dispatched through Air, Road and Waters. Hence it has all three types of damage protection available.

Insurance is always availed by all ships going into the sea due to high risk and huge amounts.

Perils are important for cover clauses

Negligence of crew also induces the insurer to cover the claim

It is not done by only one company in any contract. There is always a partnership of two or more companies as the amount involved is very huge and risk too is high.

It is a unique fairy between DAHEJ and GHOGHA. It is mainly for the transport of vehicles and till today no tragedy has taken place but yet it is a unique ferry between both the places and resulted in time reduction of travel by 4 hrs. I included it as cargo is not only related to goods and luxury items but also about the vehicles. Also as mentioned in above case cargo is inclusive of luggage of the customers. Hence the scope of cargo is really wide and the amount it encounters in premium is really huge.

This is the biggest insurance coverage case in the entire case of marine hull insurance history. The claim was of approximately 2 billion dollars which is almost 3 times the construction cost of the ship. The amount was inclusive of the damages in the ship and the compensation provided to the survivors. The reason for the damage was navigation system failure.