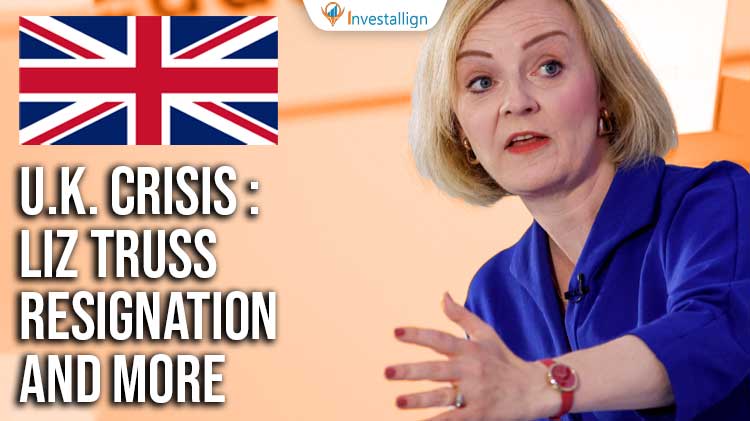 The U.K. is in the news nowadays due to its tragic inflation rise and leadership concerns. Post Boris Johnson, Liz Truss was appointed as the new prime Minister of U.K. However, after just 6 weeks in the office, Liz Truss resigned as the prime minister. This was a mixed output of the budget presented by Liz Truss and the poor leadership and decision making by her. Also it was a result of short term complications and pressure faced by Liz post her selection. After Liz got selected as the prime minister of the U.K the queen passed away.

Thus the working of the parliament was almost delayed for 2 weeks. After that Liz was busy with her UN meeting and when she arrived it was the day of the budget announcement. Thus one can say she did not put much thought into the budget that was presented. The budget presented gave only one indication, it was very much helping for the rich due to the extreme rate cuts and the poor had to suffer for the devaluation of the pound and their increasing interest rates. Let’s understand the entire issue in detail.

Problems that Triggered the Resignation

Post the selection as U.K prime minister, the queen of England passed away and the parliament resumed after almost 13 days. On 21st September the parliament resumed its working but Truss was busy with the UN meeting and hence reappeared at the mini budget announcement by the Chancellor on 23rd September. The mini budget is the main problem triggering the entire resignation situation. In the budget there were a lot of tax cuts which were promised by Truss but argued by the contender for the position Rishi Sunak.

Some of the Decisions were reducing the top tax rate from 45% to 40%. Reducing the income tax (basic rate) from 20% to 19%. However these surprising decisions cost the treasury a 45 Billion hit. After being criticised for the budget, the parliament asked for analysis of the decisions on the entire economy. However the chancellor and PM argued the same and no analysis was made.

Due to such unsupervised decisions the markets crashed in the U.K. The pound inches to a 37 years low of 1.033 Pound to dollar valuation. Also the borrowing cost increased from 3.5% to 4.3% within 7 days. But a few days after the announcement the U.K economy went into huge stress due to degrading market valuation. Also the people started to realise that the decisions taken were only to benefit the rich. The situation became so tragic that the Bank of England had to intervene and give a loan of 65 Billion to the government. All of this accumulated pressure on the PM to resign and hence finally after 44 days into the office Liz Truss resigned from the position of Prime Minister.

The U.K. government was known to give stability to the businesses. However in the past the interest rates have shot up above 4.5%. In an analysis it indicated that such a sudden spike triggered the income usage of 30% of an average family for payment of the taxes. This means that the cost of living went down suddenly and people were not ready for it. Post this the Brexit deal was also creating problems for the government. Since the deal there has been a shortage of workforce in the U.K. This triggered the supply demand shortage. The prices of goods went high not due to less supply but due to lack of supply at the proper time. This means that the cost of reaching customers went high and so did the actual price of goods and services.

This created a situation of stagflation. With decreasing prices of goods and services the profits for the companies went down. Also on the other end the prices for the same goods and services went up for the consumers. Hence the loss was borne by both the entities in such a situation. This all together created a massive pressure on the economy which pushed the U.K into the assumption that it will recession in the middle of 2023.

Due to all the situation the normal goods like prices of milk had gone up by 40%. Also the fuel prices and energy prices have gone up. This means that the new leader needs to tackle all such problems at the same time. The major contenders for the race are former Prime minister Boris Johnson and the contender to Liz Truss, Rishi Sunak. Both of them are the current favorites. But the recent news shows that Rishi Sunak has already crossed the minimum required nomination mandate. Hence it is highly possible that Rishi Sunak may resume the Prime Minister position for U.K in the current situation.