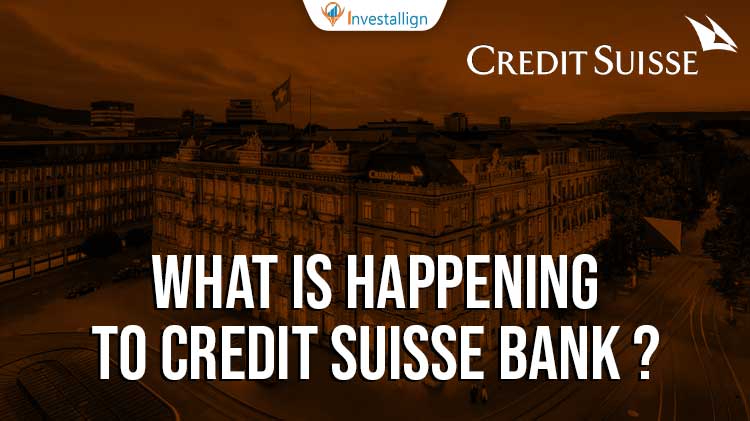 Credit Suisse Bank is a global bank offering Financial services and investment banking to more than 50 countries. It is based in Switzerland and is headquartered in Zurich. It is a very important bank for the world and as a result of its functionality it is considered as a global systemically important Bank by the Financial Stability Board. Not only this it is also a primary dealer and Forex Counterparty of the Fed.

Founded in 1856 By Alfred Escher and Allgemeine Deutsche Credit Anstalt, the bank has more than 166 years of experience in the global banking fraternity. Though being one of the major banks in the world it is involved in multiple controversies lately. The first major controversy is dated back in 2007 and it was for the mismarking case and this was followed by Forex Manipulation in 2013, U.S. Tax Fraud Conspiracy in 2014, Malaysia Development Scandal in 2015, Mozambique Secret Loan Scandal in 2017, Climate Controversy in 2018 and US Foreign Corrupt Practices Act Violation in 2018 as well.

Following this the bank was involved in Espionage Scandal in 2019, Greensill Capital and Archegos Capital Scandal in 2021. In 2022 alone there are 4 major Controversies against the Credit Sussie bank named Drug Money Laundering Scandal, Social Media Rumors of bankruptcy, Suisse Secret Leaks and destruction of Russian Oligarch’s loan documents post the invasion of Ukraine. Though Credit Suisse Bank is one of the oldest and major global banks, it has been surrounded by a lot of major controversies since the last 2 decades. Hereby the major focus is implied on the Bank’s bankruptcy rumours due to its credit default swap ratio. To know the meaning of Credit Default Swap let’s consider the example of the 2008 crisis.

Credit Suisse and The Problems

Credit Suisse is a huge Investment bank with an asset base of 1.1 Trillion Dollars. Its revenue is close to 22 billion dollars. However in the last year due to the  Greensill Capital and Archegos Capital Scandal the bank lost more than 14 billion dollars in the same. Alongside this it has been unable to post a profitable quarter 5 times out of the last 7 quarterly results. Its share valuation is also down by 60% and it has been laying off more than 5000 jobs due to liquidity crunch. The reasons behind the entire scenario were the scandals reported, The Ukraine Russia War, COVID Pandemic and the economic turmoil of the U.K. The experts believe that the bank’s situation is so critical that if it fails it would lead to another 2008 crisis situation. That is why the stock valuation is going down for the Credit Suisse Bank.

Let’s consider the recent example that we studied in the Adani Cash Strategy. If Adani Ports wants 100 Crore Rs of loan then it issues bonds for the same as one person alone cannot take up such a huge amount. Thus Adani issues 10 Lakh units of this bond at 1000 Rs each. Also this would generate the cash flow that Adani wants. However in return for the same Adani Will issue some interest rate to the bond holders which would be paid every year along with the bond amount itself at the end of 5 years. So a person named Mukesh takes up one bond and gets paid 3% every year for his investment. This means he will get 1000 Rs at the end of the 5 year period plus 30 Rs interest every year from the investment.

The relation of this scenario in the Credit Suisse Case would be explained in the next part.