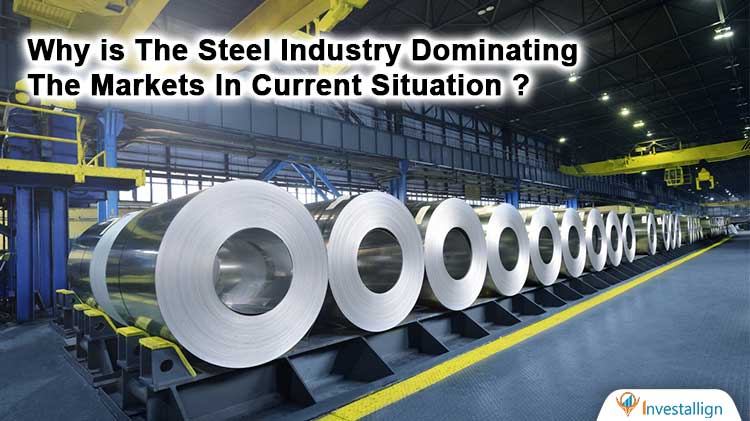 The steel segment has suffered heavy loss due to the 69 day lockdown period. The reason was all the industries were closed and hence the production and sales could not be met with each other. The production could not be stopped due to the blast furnace technique. It is a constant procedure which aids in producing steel as an end product. So the production plants of steel have kept functioning though the demand side was weak. The steel companies got some benefit from the Chinese demand but it could not help them much and their entire cash rotation and inventory status was disrupted. Hence the steel industry faced multiple challenges and went under in valuations.

Proportion of Steel Industry in Multiple Segments in India

The Steel industry has a combination of multiple sectors in its demand. The major demand comes from the construction and real estate sector. The ratio is somewhere around 65%. Hence the construction sector dominates the Steel sector demand. So any changes in the policies of Constructions and infrastructure of India affects the Steel industry directory. 15% of the demand is covered by machinery manufacturing and mining industry. Then the major sector is Railways which contributes 10% almost. The remaining demand is fulfilled by the packaging, electrical and auto spare part industry.

The major stocks of Steel segment such as SAIL, Tata Steel and JSW Steel fell by almost 20% from their training valuations.
The recent observations in the market shows that the steel sector is dominating the NIFTY50 and the market run. This is due to the high volatility and increasing valuations of Tata Steel and JSW Steel. Also the SAIL stock is showing high gains. Now what could be the possible reasons for this when the entire nation is facing a mild level of lockdown on many levels. The current lockdown restricts the businesses in many states. Hence the transport facilities and production have been disrupted by this. So what could be the possible reasons?

Reasons For Increase In Steel Valuations

The centre has taken a major decision in this year’s budget. The centre wants to upgrade the infrastructure facilities within the nation. The reason is the slow scale development in construction and infrastructure and low level of infrastructure. This is aimed to improve the existing facilities and build new phones. The infrastructure includes commercial, industrial and medical sectors. This demand has triggered demand for two industries indirectly. These are cement and steel segments. The reason is the government wants to induce steel used construction.
The facts about the projections show that the steel production before was 46 kg per capita. This improved to 57 kg in 2016 and eventually became 74 kg in 2020. The target is to reach 160 kg by 2030. The reason for such projection is that the coal mines are open to private players and iron mines are also operating at a decent pace. This all produced indoor gives price concessions and hence the demand would increase. Thus companies would be aiming to have expansion plans around that time.

The Indian demand is a result of robust increase in demand post COVID times. The construction industry has gathered momentum and hence the steel segment is responding to the demand. Now as we know that the inventory pile up was already high in the lockdown period hence the demands are met rapidly. The current situation is also not affecting the demand and this is not only the case in India. Even in China the same trend is seen in the steel segment which tells us that the steel industry is on the rise.
The NIFTY Metal Index rose more than 50% from the previous year. This is all a result of increased global demand and in house production facilities.

The sales reports shown by all the steel companies show a robust increase in demand and sales. This has caused improvement in revenue and profits as well. Let’s consider the results of Tata Steel for noting the facts.
Tata steel showed sales at 50000 Crore Rs. approximately which is almost 50% up from previous year. Also the profits displayed were 6600 Crore Rs. which is 550% more than previous year. This 550% increase in profit is a massive figure which shows how much productivity is seen in the steel segment. Thus in one year the company grew almost 50% and profits increased by 550 times. Same is the result of JSW Steel and SAIL and other major Indian Players. They all have gained rapid increase in valuations and have almost tripled in valuations from the previous year.

One important note on Tata Steel. The Fundamental analysis for Tata Steel shares was on point. As soon as the Profit announcements came forward the share price increased by almost 20%. There was also a 9% rise in one single day on announcement of results and its deleveraging policy along with Capex investments. Hence Analysis is important before picking up stocks.