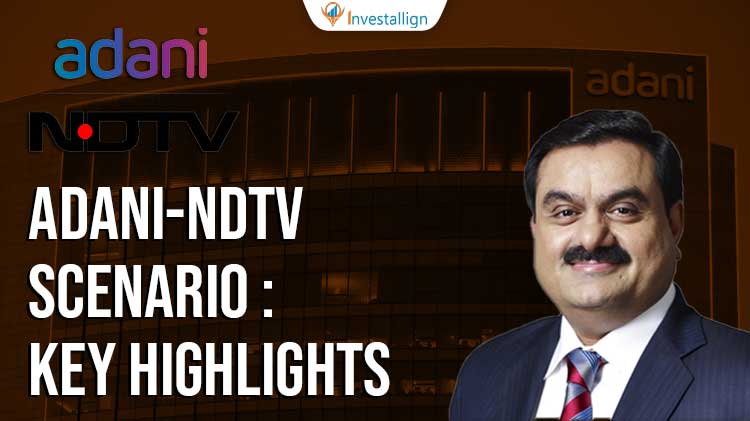 Adani Group is one the most famous business conglomerates in the current times. The reason behind the same is their rapid expansion and multiple business acquisitions in a small period of time. The wealth increase for the shareholders, promoters etc. for Adani’s public companies has been stellar. The increase in wealth is so outraging that it has made Gautam Adani the third richest person in the world leaving Jeff Bezos and Elon Musk ahead of him.

The recent acquisition that has been into highlights is regarding the NDTV media. The NDTV company has been caught into a deal that it made a decade back and currently has no legal leg to support the majority stake of promoters in the company. In other words the company is facing the issue of a hostile takeover. For understanding the scenario let’s go back in the past.

History of NDTV and Adani

The entire scenario goes back to 2008. In 2008 VCPL was established. VCPL or Vishva Pradhan Commercial Private Limited was set up as a consultancy firm. The company was set up with no assets or income of its own. The entire capital was an unsecured loan from another company named Shinano retail. Now Shinano retail is funded via an unsecured loan through Mukesh Ambani held reliance group of Industries.

In 2009 the promoters of NDTV, Pranay Roy and Radhika Roy transferred a part of their stake to RRPR. RRPR is Radhika Roy Pranay Roy Group. So from 55% stake in NDTV the stake of 29.18% was transferred to RRPR. RRPR group is a company through which VCPL gave loans for 403.85 Crore Rs to NDTV. The loan given was interest free but in return the shares transferred to RRPR were kept as a warrant which can be converted into equity shares. Thus VCPL can acquire the stake of 29.18% lying with RRPR if it wanted to in future course of time.

In 2012 Shinano company relinquished its stake to two entities associated with Mahendra Nahata who is currently a director at Jio. Thus Nahata is closely associated with the Ambanis and Reliance Group. Thus now VCPL is the main company with whom the warrants are lying.

In 2022 Adani group acquired VCPL. The company took control of VCPL through its media arm AGM Media networks Limited. With immediate effect they took control over its warrants and converted them to equity shares. With a surprise the valuation of the stake sold was close to 113 Crore Rs. This is a great discount price to the current share price of NDTV.

With such a takeover the NDTV group reported that Adani group did not take the company’s consent before converting the warrants to shares. With such a conversion the Adani group made an announcement of an open offer for another 26% stake in the company. This would make the Adani company a major promoter in the NDTV Channel. The offer made by Adani group is of 294 Rs per share at a discount of more than 40% than the current share price.

Post the takeover major critics have said that this takeover will result in an improper influence over the transparency of news for the public. The Adani group has been currently working into major sectors and this control will result in an unfair advantage for the company to hide its bad affairs from the public.

The current media sector results show that NDTV is the third largest media company in India behind Reliance owned Network 18 and TV18. These rankings are based on the market capitalisation of the companies.

Thus it is feared that the undue influence of corporations on the media companies will result in unfair trade practices in Indian Democracy.

The Rankings based on the market capitalisation are :

Since the news for the takeover has been in public the share prices of NDTV have rocketed by almost 250 Rs in 15 trading sessions. With the news the share has given a 600% return in one year time period. The share price of NDTV was at 77 Rs in September 2021. The current price for the same is 518 Rs. The high posted by the share was almost 546 Rs. Thus the investors have made a stellar 600% gains since the last 1 year. However attractive the prices are, Adani’s open offer places a serious question in the minds of investors. The open offer will get active in mid October and will conclude by 1st November. The price is 294 Rs per share. The promoters of NDTV are in a fierce battle with the 3rd richest man in the world to keep power and the fate of their company.