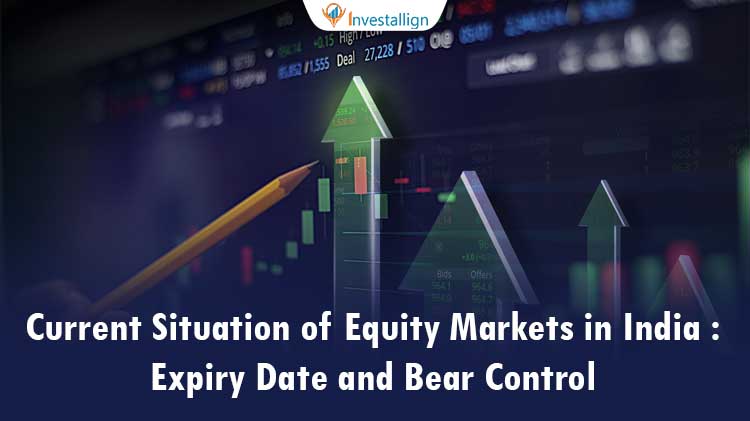 Indian Equity markets are currently in the clutch of the bear community. This can be estimated through the constant market fall since the last 5 days. The Sensex tanked for more than 3000 points in the previous five sessions. This amounts to the NIfty50 losing approximately 1200 pint gain in 5 sessions. This fall was in lines with the one week before fall of Nifty till 16400 Levels. In this fall one thing was really significant that Nifty50 did not go beyond 17000 Levels. However SGX Nifty in the late night session of 24th Jan, cruised towards 16700 levels. However, the early market recovery led the Nifty50 to end in green on 25th January for the first time in the last 6 sessions.

This could be called as the effect of bear grip on Indian markets. However one cannot be surprised if the Nifty50 sees a turnaround in the 1st week of February. The reason is the Indian budget elaboration on 1st Feb, 2022.

First and foremost reason is the rising tension between Ukraine and Russia. The countries have been at each other’s neck for the past 1 month. All this initiated with Russia moving its tankers alongside the Ukraine borders to initiate a ground attack on it. The situation is very intense and US and NATO have together been in talks with Russia constantly. The situation can lead to a World War as well. Dubai also received multiple threats from terrorist group for destruction of Abu Dhabi. The incident is even supported by multiple missile attacks on it. Thus terror and fear of war are major reasons why the Markets have seen FII exits for long time.

Another reason for FII outflows is Fed’s announcement on rate hikes and tightening of policies running forward. These reasons have not only been pulling the FIIs out of Indian markets but also creating a fear among the DII’s and retail investors.

Other Reasons for Market Fall

The market has been witnessing some of the most dramatic weeks since the COVID fall due to expiry combined with the pre budget rally. The Indian markets are currently driving through the wave of pre-budget rally. No one can forget the time when this happened in the previous year as well. The only difference was the markets were cruising to achieve new highs on a daily basis. The pre budget rally in 2021 was supported by bulls and the acne market was getting new gains daily. However in this case, for 2022 the markets are not at all supporting the pre budget environment.

Along with this the expiry for the month is over the head. This means that markets would be witnessing multiple side swings in the upcoming session of 27th Jan, 2022. The holiday for tomorrow may completely reverse the position for the investors in current times. However the markets are responding in a haphazard way currently. This can be said due to the bounce back of almost 300 points in one single session for Nifty50. The VIX even touched more than 20% change in the 24th Jan, 2022 session. Hence one should be cautious for trading and should not watch the markets if focussed on investing.

What Further to Expect ?

As noticed in the 25th Jan, 2022 session the markets reacted in a very productive manner for its recovery to 17300 levels. This also means that markets can open in green on the day of budget. However the stocks in Nifty50 say otherwise. The markets were only green due to the Bank Nifty stellar support. On the other hand Reliance has been constantly draining wealth. The technology stocks are somewhere neutral but the results of Wipro have been questioning the techno sector sustainability as well. One can only dream for the market stability in the current situation given the further course of events.

For the next 2 weeks one should definitely be away from long term trading positions. It is the best time for stock scalpers. However the volatility would be very high which triggers the point that option traders should also be cautioned for the next few days. The market direction can be seen in red for the further course of action. However the most important levels for the next few days would be 17000, 16800 and 16600. These are the most crucial levels. For the upside one can target 17450 and 17650 levels. Hence Indian equity markets are going to be in the sights for the next 2 weeks.