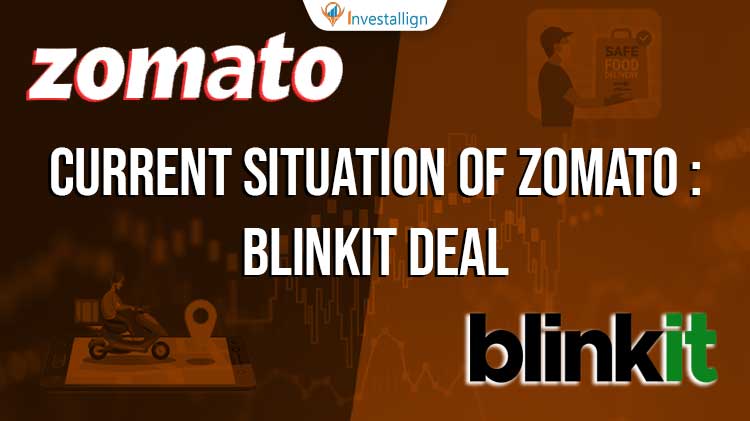 The Indian markets are currently facing a major correction given the price stabilisation efforts from the government. The central bank has been increasing the rates of interest so that the liquidity flow can be controlled. This has resulted in lowering the profit margins of companies and hence the entire market is panicking with losses. The market sell off is a mixture of decreasing liquidity, higher inflation and increasing interest rates. Alongside this the world indices and even the situation are getting worse due to the Russia Ukraine War and COVID aftereffects. Hence all this has resulted into market panic for a short span of time. The rumours are also ongoing for the set of recession in near term. Hence one should be aware of his or her long term positions and stick to the same.

Blinkit is a new business model functioning to provide quick grocery delivery to the customers at their doorstep. The same has been initiated by Swiggy in the name of Swiggy Instamart. The online food delivery companies are now shifting their focus towards the grocery business as well. The reason is their network is already spread wide due to the presence of food delivery service in every domani possible. This will give them another benefit of having such a huge network of employees.

Zomato has also entered into the Thai segment in early stages itself. However with this deal the company will have a benefit over its Gross order Valuations. The deal will include a 100% takeover by Zomato through stock holding. The deal is worth more than 4447 Crore Rs. This would mean Zomato’s profitability is going to take a huge impact for the upcoming quarters. The company is already reeling from loss of past and within that range a new deal would mean more cash burn and more investment.

Zomato’s board has approved of this deal finally and they will be running the Blinkit application through Zomato. The deal would hand over more than 400 Dark stores and the entire networking of 15 cities. Zomato already has a presence across 100 cities and some of them overlap with Blinkit. However one can be sure that the business will make profits for the company but not currently. It will take at least 3 years to make the figures turn profitable.

The entire deal is worth more than 4447 Crore Rs. The deal will mean an entire handover of 400 dark houses and 15 city’s networking to Zomato. The company has been able to generate more than 79 Lakh Orders in the month of May. Thai amount is 16% to the orders received on Zomato. The order value of Blinkit is also 28% higher than Zomato at 509 Rs.

The entire scenario would make Zomato one of the leaders in the segment. However there is a constant and strong competition from Swiggy Instamart side by side. The company Blinkit had to close more than 50 dark stores sometimes to reduce their losses. The company was able to curtail also 90 Crore of its losses. This is more than 90% of the cash burn it used to have. The existing shareholders will face a dilution for more than 7.3% in their stock holding. However the entire deal would be challenging for the Zomato team in both short and long term

Zomato and its Stock Price

The reason why analysts have mentioned this deal to be a challenge is the profitability of Zomato and Blinkit currently. Zomato is already under heavy losses and this acquisition would mean more cash burn and it would widen its losses. On the other hand this would extend the first profitable quarter of Zomato by almost 2 to 3 quarters. The Blinkit company also required significant time to become profitable.

This synergy would be a real challenge for the competitors, however the expansion of the same for a long run is still questionable for many analysts. The valuation of Zomato share in the current market is close to 65.85 Rs. The share had fallen from its 52 week high of 169 Rs. Also its 52 week low is 50.05 Rs. The acquisition has resulted in a landslide in the shareholding of the same. The company’s shares were down by more than 6.5% on Monday’s session. This means that the shareholders are having their concerns about the acquisition itself.

Whatever the shareholders think, the board members want this deal to get through. They must be having a lot of separate plans regarding this acquisition which would be known in the long run. Currently one should think of investing into Zomato given its bright future ahead and current valuation. The share is already more than 120% of its 52 week high. This would mean when the Indian indices make a U-turn, the share will automatically start uplifting itself.