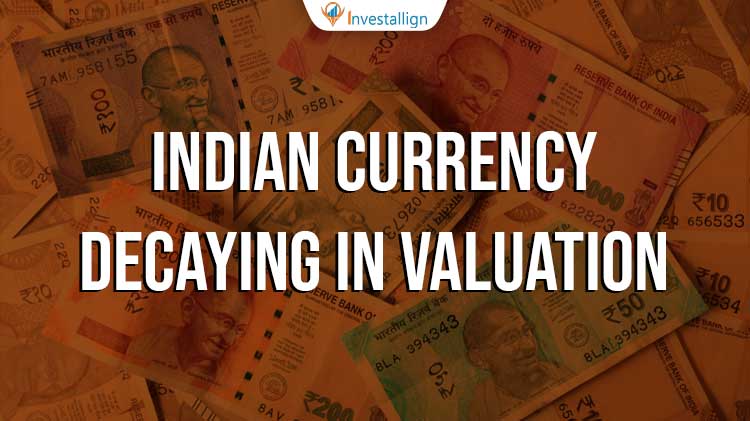 Indian Currency is at its all time low right now. The Indian economy is suffering from multiple ends due to inflation and price rise is crude oil. There are multiple factors that have accounted for such a tragic fall in Indian currency valuation. However the situation draws itself back to the time when COVID infected the entire economy and Russia invaded the Ukraine province.

One dollar currently accounts for 79.25 Rs. This has been slightly lower from the all time high of 79.41 Rs per dollar of this month itself. The major reasons behind the currency devaluation is the increase in the US dollar demand, major outflows of dollars from the Indian economy and crude oil prices. As per the statistics the FII have pulled out more than 2.15 Lakh Crore Rs from the Indian economy. This amount is more than their buying across the last 11 years in the Indian economy. The same has been reflected in the equity markets as well. The indices are down for more than 10% since the start of this year.

The domestic market is under pressure as the interest rates are jacked up across the world. The entire world is facing interest rate hikes as the inflation pressure increases on the world. The world is said to be moving towards recession. To save the economy from its onset most of the national banks have been increasing their rates of interest.

Why is there a fall in Rupee ?

Whenever such a situation of inflation sets in, the entire world looks towards the U.S. The reason behind this is such a volatile situation the investors pull out their money from unsecured or risky markets and move it back to safer markets like the U.S. The major reason behind the FII outflow has been the same.

Let’s understand how the entire situation has shaped out and how it is playing with the currency in a direct manner.

When the COVID hit the economy the entire supply chain was disrupted but somehow the markets recovered from the losses. The reason was the economy started working again and it was assumed that the supply chain disruptions would end soon.

However one cannot forget the day when the Russian government ordered the invasion of Ukraine and the situation turned out to get worse. The Russian government invaded Ukraine given the NATO crisis. This gave rise to one of the most crucial resources of the world getting costlier. The resource is crude oil. Russia is the second largest exporter of crude oil. This means that the war situation will start the supply disruptions for the resource. This means less crude for the entire world. In today’s time crude oil is very important as it accounts for manufacturing activities in a direct or indirect manner.

Now let’s shift our focus towards the Indian economy. The USA, UK and certain other countries banned the Russian oil imprints and hence the world moved towards a shortage of Crude oil. This inflated the prices of crude above the 100 Dollar per barrel mark. Secondly to counter the rising inflation the world bank and RBI both increased the rates of lending and hence the entire economy is facing high liquidity shortage. Whenever such a situation persists the FII moves their money to safer sources. Hence they fled their money back to the USA from India. This weakened India’s reserves and made its currency valuation drop by a large amount. Another aspect in this scenario is the crude oil imports.

The US imports of crude would be uniformly costlier. Thus the dollar outflow is higher for crude oil buying. This means that the US dollar is getting stronger. With the Dollar getting stronger every asset under it would increase and every asset it is compared to would decrease in valuation. This means that the prices of US stocks and bonds etc. would increase. Whereas the currencies to which it is compared in global markets would decrease in valuation.

When the buying power of Rupee increases it can buy more dollars with one rupee and vice versa. In the current situation FII have been exiting the Indian markets and this means they are selling Indian currency based investments and buying dollars or dollar based investments. This directly triggers the price of Rupee to fall and it will also impact the Indian trade cycle.

The reason behind the same is the purchasing power. As explained above if the buying power of Rupee decreases it can buy less dollars with the same amount of Rupee. Also the Indian economy is a trade deficit economy. The imports of India are more than its exports. This currency devaluation means that the trade deficit of India will increase and hence the entire trade cycle would be affected with the currency value getting affected.