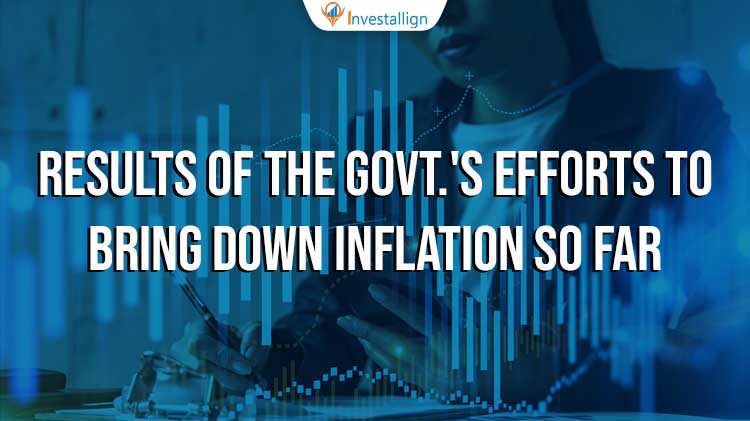 Inflation is one of the most infamous words of the current times. Whenever the markets hear or merely sense this word they become unstable and lose a huge amount of gains. However the situation has been quickly understood and necessary actions are straight away implied by the government on the economy. The government understands that minor rate of inflation is good for the economy’s growth. However, a higher amount of inflation causes the economy to lead to recession or stagflation. On some stages minor recession is also good as it helps the economy to move ahead very quickly towards growth. However, stagflation is not wanted by any economy as a result of the global crisis.

In reality no economy wants to have recession as well as high rate of inflation and stagflation. Every economy wants to have inflation on an average rate. This helps the economy to improve in a steady manner. Mild inflation will enforce more growth from the economy to fulfil the basic needs when the cost of goods and services go higher. This directly increases the rate of employment and production of goods indigenously. However the current situation has caused a great pain to the markets given the rate of overall crisis across the world.

Inflation when at a proportional rate is helpful for the economy. However the higher amount of it results in the derailing of the entire economy. The current situation has been alarming for the economy as post the Russia Ukraine war the entire world is put in a price rise situation. The main reason behind it is crude. Crude oil exports of Russia are second largest in the world. Due to the war situation the oil of Russia is not bought by many provinces creating a shortage of Crude Oil across the world. This has caused the prices of crude oil to go above 100 dollars per barrel. Currently the price of Brent Crude is close to 117 dollars per barrel.

The government has been under pressure to quickly resolve the situation by taking actions against the rapid price rise. This has been the reason behind the interest rate hikes. The interest rate has been on the rise to limit the liquidity flow in the economy. By controlling liquidity the government wants to limit the demand by the consumers. Hence with the lack of demand and overproduction in place, the prices will themselves settle down across the economy. This is the plan so far by the government. But has this move been effective ?

To answer this question we have to analyse the situation of multiple sectors before and after interest rate hikes. One of the major business lines in India is Steel, Textile, Plastic or Packaging and Petroleum. Let’s take these into consideration.

The textile industry depends on the rate of raw cloth or Grey available in the market. Since the imports from China have slowed down due to multiple reasons the demand for locally produced raw cloth of finished cloth has increased. This has caused the local industry to boom over time of COVID. The price of grey however has bounced to new highs. This caused the prices of finished products to rise. Thus grey prices have been an important factor. However with the latest fall in crude oil prices the prices of raw material available in the market decreased in the last 1 week.

Plastic industry or Packaging industry is the final process of any industrial segment. The prices of packaging materials decide the final cost incurred in making of product in house. However the prices are not much compared to the price of products. Sometimes a huge spike may cause the entire profit margin to suffer. The recent example is the per kg price hike in BOPP materials. The prices of BOPP increased from 120 Rs to 186 Rs. This made the packaging cost increase in a small time. However with the current reforms in place the prices of the same material has dropped to 150 Rs per kg.

Steel sector has been facing tremendous pressure due to two reasons. One is the interest rate hike and another reason is the export rate hikes. The steel prices in India were at all time high and to neutralise its prices the government is trying to balance its demand and supply equilibrium. The government has increased the export rate duties on the steel products and entire steel industry. This has caused the exports of the industry to decrease. Thus the products made would be forced to get supplied locally. This will ensure higher supply of the product domestically and hence the demand and supply equilibrium will be set again. Thus the prices of steel and its related products will neutralise soon. However, the price decrease has been noticed recently.

This is the effect of the government reforms on the economy’s multiple sectors.