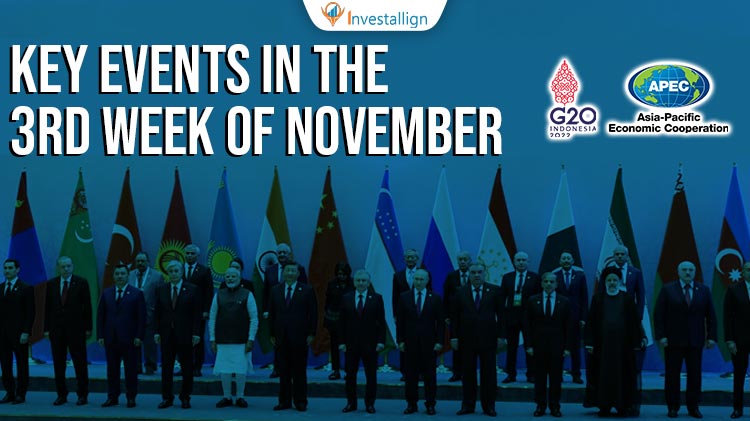 The global trends are seen shifting towards a positive route. The reason is the controlled inflation data given from the U.S. Also the markets across the world are recovering in the hopes of a fast and speedy recovery from the grip of inflation and even recession in some places. Based on this the first major event to watch out for will be the November 14 data publishing from the Indian government regarding the CPI and WPI. Following this there would be a huge focus on the G20 Summit which would happen between 14th November and 16th November in Indonesia. There the leaders of the G20 community will meet which includes Narendra Modi, Xi Jinping, Joe Biden etc. Post this there would be a separate meeting between the American president Joe Biden and Chinese president Xi Jinping.

After this is over the leaders of APEC would gather in Thailand for the meet on 18th November and 19th November. Alongside this the eyes would be definitely on the earnings release of the companies listed in the Indian Stock Exchange.

The Indian government published the CPI and WPI data on 14th November. As per the reports the Retail inflation came down to 6.77% which is at three month low. This data is recorded regardless of the interest rate hike from RBI. Also the same for September was 7.41%. Hence the change in the retail inflation is more than 0.6% which is a good sign for the economy. The tolerance band of RBI ranges from 2 to 6% which is not far away from the current data. Thus one can expect the inflation rate to go in this range by the end of the March Quarter. The target set by the central government is 4% for the RBI.

In the data the food inflation came down to 7.01% from 8.60%. The factory output faced a growth of 3.1%. However with the inflation rate above 6% which is more than the mandate of RBI, another interest rate hike can be expected from RBI. The WPI recorded was 8.39% which is lower than the 10.70% in the previous month. The cumulative increase in repo rate is 1.9% since the May month and is now at 5.9%. Thus with an expectation of another rate hike one can assume a 50 basis point increase which will make the repo rate stand at 6.4%.

The G20 meet is an important event as major leaders across the world would gather to discuss the global problems and find solutions or stable methods to control the entire situation. The theme of the meet is set up as Recover Together, Recover Stronger. The major issues that are expected to be discussed are food, energy, security, digital transformation and health. Also the prime minister of India is set to address the Indians residing in Bali.

Following the G20 summit the Chinese and American leaders are set to meet face to face for the first time since Joe Biden took over the office. This meeting will be crucial as the Chinese government is focused to take the way forward and clear all the misunderstandings between the nations.

In this meeting Vladimir Putin won’t be present. This may be because of the ongoing situation between Russia and Ukraine. There would be huge chaos if the questions were raised and hence the Russian president has decided not to be present in the meeting. However his foreign minister Sergey Lavrov would mark the presence of Russia.

The G20 group consists of 85% of the global GDP and two thirds of the world population. Alongside this they account for 75% of the world’s exports. This includes Argentina, Australia, Brazil, Canada, China, France, Germany, India, Indonesia, Italy, Japan, the Republic of Korea, Mexico, Russia, Saudi Arabia, South Africa, Turkey, the UK, the US and the European Union (EU). Also for the 2023 G20 meet India would be the host.

The APEC Summit is the meeting of the Asian Pacific Economic Cooperation. The Russian president won’t be present at this meeting as well. For America Kamala Harris would substitute Joe Biden in this meeting.

The Export and Import data or the trade deficit figures would also be published this week. The data for September represents a 25.71 billion dollars of Trade deficit. However the service import grew by 20% but the exports were increased by 18.72% only. On the other hand the exports rose by 4.82% to 35.45 Billion dollars and the imports rose by 8.6% to 61.61 Billion dollars overall for the month of September. Hence the trade deficit data would be closely watched. This represents the condition of the Indian Business sheet. This is helpful to gain more vision about the future trends of the trade cycle in India.