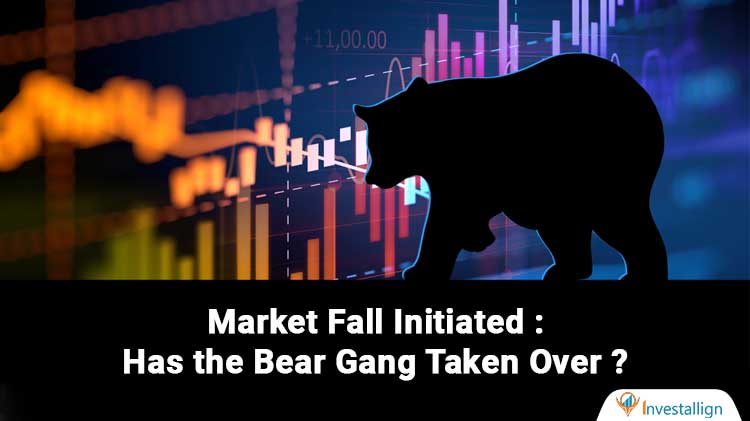 In recent times, the market has been very volatile. The reason is the increased movement of liquidity in the market. This has been possible due to the FII Flows. The demand and supply of stocks and options has been increasing lately which has resulted in quick price movements in index and shares. All of this is possible due to the all time high price level achievements from Indexes and major Nifty 50 stocks. The market has been witnessing a constant bull rally since the last 2 months without any drain in the price levels for more than 2 straight days. However this time the situation has been different. The market has been witnessing a price correction right now. The traders and investors are under a Sudden panic due to the profit booking situation in India.

Currently the situation is such that even when the Global indices like S&P, Dow Jones, DAX, Nasdaq etc. haven been posting positive gains, the Indian Indexes haven’t been able to revive again. The case before was different. However the situation was, even if the global indices were going down, Indian indexes would hold up the market flow and never turn red or go below the previous day’s lows. Hence the trend is definitely seen changing right now.

There were many instances in the previous 2 months where the bulls and bears locked up in a fight and it ended the market rebounding from the lows. For instance let’s take the 17250 levels. One day when the market was off, SGX Nifty fell more than 400 points and it resulted in solid profit booking from the market participants. However the rebound was so quick that bulls took the Nifty50 up quickly and crossed the 17600 levels instantly in the next 1 week. This was such a major break that there was a constant increase in market levels upto 18600 levels. Thus the markets were taken over by bulls at every instance where the market was under correction mode.

This time around there are three major points to focus on. First is the market correction, second is FII outflows and investment into other global markets and third one is exit from major stocks by market participants.

The markets recently reached the 18600 levels and the Bank nifty is now on the all time highs. However the Finance sector is the only point that has held up the markets currently. However if the financial stocks take a drag down, then there would be a tragic correction in the markets. There has been a very interesting rotation going in the markets.

Firstly the Nifty50 experienced selling pressure and then the financial segment intervened and stopped the market fall. Then Bank Nifty took the markets to a stable zone by crossing 40000 Levels for two consecutive days. Now, the Reliance JIO results have kicked in and it is expected that Reliance would hold up the markets for the next week. Hence there is a very planned rotation of liquidity going on in the markets which is holding the market fall in a planned way.

The FII has been a constant seller since the last 4bdays in the Indian Markets. This has resulted in Indian markets bleeding more than 500 points in the previous week. This took a major hit on the participants and the investors lost a huge chunk of money. Right now the Indian markets are under the festival mood of Diwali and on top of it the sales have increased rapidly this quarter in comparison to the previous quarter which was covered with COVID situation. The FII outflow means the money is getting invested into other global shares and markets. This is not a good sign for any market as it indicates that FII is not interested much in those markets. It also displays that major possible gains have been taken up and positions have been squared off.

Sell of In Major Stocks

The most increased stocks in this rally were IRCTC, Tata Motors, Reliance etc. These major stocks faced a huge sell off this week. However the sell off did not take away much gains from the investors who have been betting long on such shares, but it was a great hit for the traders. The trades took a hit of more than 20% on IRCTC stocks in the previous week. Reliance dragged for more than 2.5% in the previous week. Tata Motors and Tata Power also witnessed some selling pressure.

Along with these stocks such as Dr. Reddy witnessed a value erosion of almost 400 Rs. due to this situation. Hence the shares have been under selling pressure and this is due to the market correction and FII outflows. The investors are the winners however in these markets but the traders are at a large exposure in current situations.

IT is yet not safe to say that the Nifty will witness a selling pressure now. However it seems very obvious that post the Diwali festival there are chances for constant swelling in the market. The reasons are overpriced markets and a fear among the traders for a rapid and deep market correction. Hence be cautious while trading and keep a varied choice of stocks while investing. Investing into Indian markets at every dip is always going to produce good returns in the long run.