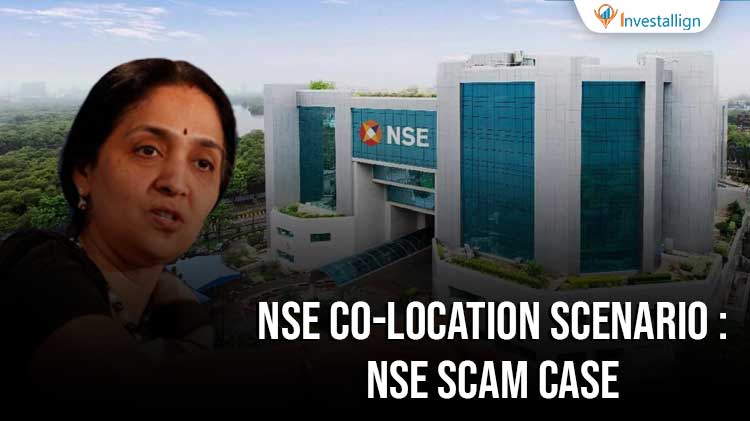 NSE is the leading stock exchange of India. It was established post BSE. However its growth speed has always been more than the former one. The company initiated its business operations in 1992. Since 2002 companies have been listed on it. The NSE is therefore like the main stock exchange of India. Now what will happen if people get a reason to believe that the biggest stock exchange of India performs partially against the common people and business by prioritizing the rich and influential people. Sounds very wrong, doesn’t it ? A similar scenario has been witnessed in current times. The NSE has been under investigation for a long time over a Co-location case. The case is so severe that CBI has been a part of the same.

Now firstly let’s understand the term co-location. It is a term used in reference to the brokers and Stock exchange. Co-location is a facility given to brokers by NSE. With such a facility the brokers can place their services inside the NOSE to get quick access to real time data. This facility can enable the brokers to have an edge over others and give them the benefit for making moves before others can catch a wind of the same. Hence the facility gives all the brokers inside the NSE an edge over the others. Well this facility itself may sound partial to common people but the fact is it was still launched and even practiced today with stricter norms.

After understanding what co-location is, it can be easily derived that one who has quick access to the data can earn more profits in comparison to others. The same case has been witnessed in the co0location scenario. With the facility available for all the brokers, there was a loophole which was exposed by OPG Securities. The brokers can get a bit of delay in information if more people are working on the same servers.

Hence the easy way to crack the problem is to enter into a server room where fewer brokers are registered. OPG took advantage of this loophole and got access to multiple servers through IPs with the help of insider people.

For this their major source was Subramaniam and Ramakrishna. Thus not only OPG was in the space in a less occupied area but was also given timings for opening and closing of different servers so that it can enter early and place bids before anyone else can. This happened continuously for 3 years between 2010 to 2013.

Ramakrishna was appointed as NSE’s CEO and MD in 2013. She joined NSE as incharge of the debt department in 1994. She was then made MD when the entire idea of Co-location was made in 2009. From 2013 to 2016 Chitra Ramakrishna was the head of NSE. Subramaniam on the other hand seems to be the primary victim of the scenario. He was appointed as Group Operating Officer against his lack of experience by Ramakrishna. Not only this he was also given a hefty salary against the rules of NSE. This seems a clear case of dominance on part of Subramaniam.

In the theory presented by CBI, Ramakrishna was constantly in touch with some Himalayan Yogi Baba. She took his advice before every decision. Even there are records for exchange of mail between both of them. As per CBI, Subramaniam was that Yogi. However, the Court has brought this argument down on the basis of lack of evidence.

The scam was taking place even before Chitra Ramakrishna became the NSE CEO. Thus the CBI also arrested Ravi Narain (Ex-NSE CEO even before Ramakrishna). Thus all the parties involved in the case have been summoned and taken down by the CBI. But the scam involves innumerable trades which cannot be tracked back. Thus the scam is gonna stay still and nothing can be done about it unless the brokers and parties involved are charged with the scam amount. The special agencies target the scam amount to be in the range of 50000 to 70000 Crore Rs. The reason is the tenure of the scam (6 years and more). Even the involvement of multiple parties in the scenario would increase complexities on part of CBI for solving the case.

People have been in shock given the scam information. The reason is very obvious. Stock market is supposed to be impartial and unbiased but if such incidents come to light people would stop believing in strategies and follow the trend of insider news and insider information. However such scams should stop taking place into such highly placed institutions. If not, the entire market is going to collapse due to lack of trust from local investors as well as FIIs.