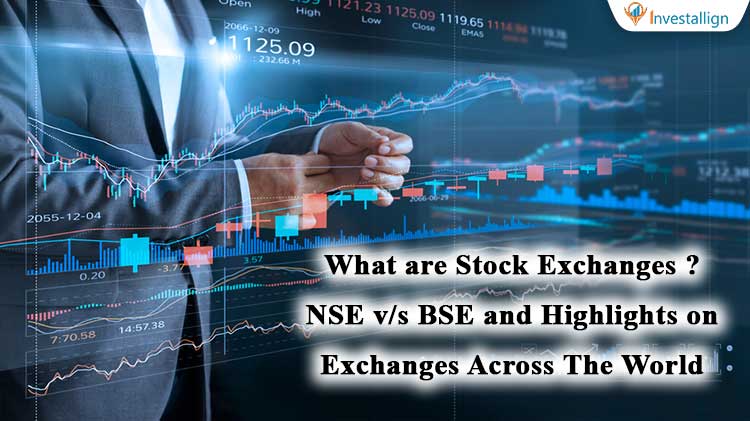 Stock exchange is a place where traders and stock brokers come together. They share this platform to perform exchange of financial products like bonds, funds, shares etc. legally. The exchange helps in safe and trustable transfer of securities. If we look into history the stockbrokers sold these shares like vendors selling vegetables in the stock market. There are various series and movies annoying these senses, one such latest series is Harshad Mehta Scam 1992. It displayed very acutely the stock exchange working patterns before technology was introduced and after technology getting into action. The first stock exchange began in Amsterdam. It was known as ASE (Amsterdam Stock Exchange). It began in 1653. There are various stock exchanges functioning today across the world. Major stock exchanges across the world with their time zones are mentioned below :

Most Active Stock Exchanges In The World and SGX NIFTY

The most active stock exchanges in the world are LSE (London stock exchange) and NYSE (New York Stock Exchange). The Indian markets have another Nifty50 substitute known as SGX NIFTY. This index is originally based in Singapore. The reason why it is called a substitute for Nifty50 is that this index is made for trading by FII this index works for almost 16 hrs. It starts at 6:30 AM in the morning and ends at 11:30 PM at night. Also the SGX nifty works parallel to the NIFTY50 Index. Hence the price variation is maximum upto 30 to 40 Rs in both the indices. So one can predict the opening and closing of NIFTY50 on the next day by watching and following SGX NIFTY.

In India there have been multiple domestic stock exchanges established and getting closed in India. These stock exchanges did not have their own index but they formed unions and traded. Major Stock Exchange (S.E.) were located at :

Bombay stock exchange is the senior most Stock exchange across Asia. The person responsible for it was Premchand Roychand. He was the then Big Bull of India. BSE made its first appearance in 1875. The BSE got its official license in 1957. The government recognized it as an official and legal stock exchange. The BSE gave rise to its index known as SENSEX. The SENSEX consists of 30 companies deciding the flow of Indian Markets on a single day. It was not allowed to be traded but it was just an indicator of the market sentiment.

BSE ranks 7th in the race for best S.E. in the world. It accounts for a mrkt. cap of roughly 2.8 trillion dollars as per reports in 2021. BSE got its online trading platform BOLT registered in 1995. It offers CDSL depository services along with risk management services  and  market data services

NSE is the most recognized stock exchange in India. It was registered in 1992 post liberalization. It was the first exchange to offer fully automatic trading services and market services in India. This system removed the hassle of maintaining paper records and sharing certificates. It got registered as a stock exchange in 1993 after its approval as a tax paying company. It formed NSDL to offer depository services in 1995. NSE offers the investors various facilities including a safe vault for holding of shares and market services and risk management services as well.

Following this move NSE launched NIFTY50. It is an index which involves the top 50 companies trading in the market. The Nifty50 index can also be traded. Hence NSE took major steps around 1994-95 and has become more popular and advanced than BSE today.

Which Stock Exchange Should Traders And Investors Prefer ?

The traders and investors can prefer either of the stock exchanges. The reason is both these exchanges are working well and have been recognized by the government. Also both have advanced technology and hence can serve the customers well.

There may be no choice in case of shares which are only listed on NSE or on BSE. There are some stocks which are not listed on both exchanges so the consumers have to opt for the listed exchange only. In the rest of the cases any exchange can perform the required service for the consumers.

Difference between NSE and BSE

Despite the fact than BSE has more companies and more market capitalization than NSE, BSE has lower liquidity NSE. The reason is the amount of trades registered. NSE has a lot more trades executed and registered on its exchange than BSE. Hence this is the reason why NSE has more liquidity in comparison to BSE.