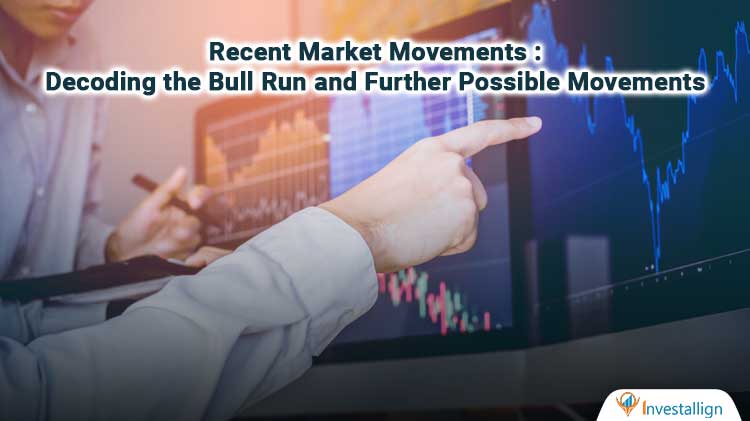 The Market Indices have been moving on a great volatility in recent times. The bull run has been continuing since the Nifty crossed levels of 15800 and 15900 simultaneously. There were a lot of other factors that affected this bull run. It was the sectoral movements & Nifty and Sensex Cruising to new highs. Movements of the Giant Stocks such as Reliance, TCS, Infosys, HDFC Bank and Bajaj Brothers was also a major reason for the bull run. The Foreign markets were also supportive and the NASDAQ and DOW Jones were achieving new heights every session. Thus such were the reasons which caused a major upside in the markets for the previous two weeks.

Factors Indulged into Such Bull Run

The obvious reasons were the unlock news from various states. The major reaction came when Maharashtra announced its lockdown. This was a great step towards achieving higher production into the corporate and business segments. This was led by some changes in the lockdown strategy of Karnataka as well. I we look then the South Zone has been under constant lockdown. Also the norms are quite strict there hence one of the major business hub was closed. With upliftment of such norms there was a positive wave of business movements there which may make the investors cautious about buying the shares.

Along with this there was strong support from the DOW JONES and NASDAQ. Also DAX and other indexes were achieving great returns in the rally. The only shares that were getting hammered were Chinese. However they also made certain progress down the two weeks. There were constant updates from the News Channels regarding the new heights achievement of the indexes. The reason was the FED stimulus and great earnings from U.S. companies.

The previous week was full of positive news about the Indian Indexes and companies. Reliance, the elephant of the Indian market, cracked a deal with Saudi Aramco and hence gained the heights of 2200 Rs. HDFC bank received news of easing norms on credit card banks from RBi. Bajaj Brothers crossed their all time highs. This was due to the Nifty and Sensex crossing their all time high levels. Sensex touched almost 56000 levels in this rally. All these things trigger the pending and limit based call and option orders and other daily bids which gave markets extra momentum which was required in the markets.

Adding to this the technology sector boosted the Indian Markets with outstanding gains. TCS, Infosys and Wipro all the major stocks including HCL Tech and TECH Mahindra gained excessively well on this bull run. Hence this was an all round performance from the Indian companies and the Indian Index. There was also a booster when BSE and NSE announced that they will undertake the direct exchange of foreign stocks listed on multiple indexes.

This led to another liquidity booster from the investors. Also one important thing to note was that the IPO was not getting as much subscribed as they did previously. The midcaps and small caps were also losing their returns and gains. The reason is very simple: the investors and funds and traders all together pulled out their investments from all the other segments and put them into the broader markets. This gave a robust boost to the markets and the indexes.

Henceforth all these reasons collectively put the Indian markets on top of the 16700 levels.

Future Growth and Other Aspects Down the Line

If we look at today’s markets there was a sharp panic in the world. The SGX Nifty which is said to be a parallel with the Nifty50 suffered heavy losses close to 2%. The index fell more than 300 Points in the early morning session. Then later on the markets recovered themselves from these levels. There was however a sudden fall in the European and Chinese Indexes as well. Japan’s KOSPI also feels massive. The reason stated is the FED Tapering .

This news is not good for the Indian markets which have achieved new highs. This signals that the markets will definitely open in red and can break all the support levels. This phenomenon is also known as the correction effect in markets. When the market achieves great new heights at some level the profit booking comes in and the market corrects itself in proportion to the gains made. Hence there are chances that down the line the market can show a correction of almost 500 points from current levels.

The Nifty can reach upto 16000 Levels but the strong support is seen at 16147 and 16000 Levels. Hence one needs to wait right now to invest into broader markets. However this also means that Midcap and Small cap will again go into business and gain from the profit booking session.