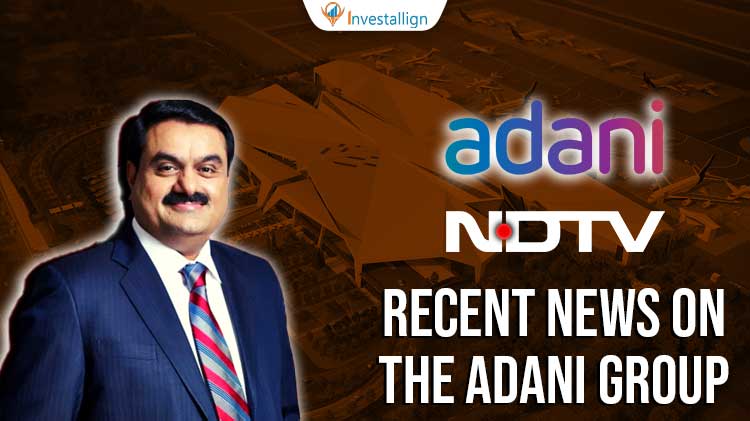 Adani group is one of the most followed groups nowadays due to the rapid expansion and takeover plans. The company has been following every segment and is trying to penetrate its business in it. This began with the Airport Businesses and then it was the Cement business. The latest deal involves the Media Company NDTV and hence the company is slowly entering into the segments that can be the future of business.

The Adani Group is finally given the approval to go after the 26% stake buying through an open offer by SEBI. In other words the company was going to put forward an initial offer before as well but due to the SEBI approval proceedings the company was stalled. However now the company has decided to go after getting the stake of 26% in the New Delhi Television Limited (NDTV). This will make Adani group own 55% stake in the company. The company already owns the 29.18% stake through buying another company from which NDTV took a 400 crore Rs loan a decade ago in exchange of warrants. The warrants give the company full right to take shares in exchange at any point of time.

The Adani group is already eyeing stake in Bengaluru airport after it has successfully got business to run in Ahmedabad Airport, Mumbai Airport, Lucknow Airport, Mangaluru, Guwahati, Jaipur, Thiruvananthapuram. This would make the company modernise and operate 8 airports if the company gets a nod for the Bengaluru airport. Apart from this Adani Group has already started developing the Ahmedabad International Airport. Also the company has got permission to operate the airports for 50 years.

One of the most shocking stock surges recently for the Adani Group is in Adani Power. The company was having a stock valuation of 14 Rs. at some point of time and is now valued at 360 Rs with an all time high of 432 Rs. Also the 52 week low for the firm is close to 93 Rs a share. Apart from this the company is eyeing to have a power deal in Sri Lanka amid the India China tensions already going over the nation. Thus the Adani group is trying to be an important player in the development of the nation through all its strength via all its companies. Apart from this the result of Adani Power was great this time. It made a 36% growth in Revenue and the profits stood at 696 Crore Rs.

Since the Reliance and Amazon tussle on Future Retail, the company has been through a lot of stress. The entire scenario can be known in the Future retail Blogs. But the battle of taking over the Future retail assets is still on. 15 companies including Adani and Reliance have expressed their interests in Future Retail assets. By this maybe the Adani Group is hinting to enter the realtor brand as well. Recently the company has been launching Fortune stores across India. These outlets sell only Adani products. However with the bidding of Future Retail assets the company may penetrate into the retail chain.

Adani Group becomes the first Indian company to enter into the Sri Lankan Port Business. The port business will be through West Container International Terminal Joint Venture and Adani Group will have a majority stake in it. The construction of the Port has also started and this is the largest foreign investment ever in the Sri Lankan Port Industry. The construction is aimed to end by 2024. This plan will improve the Sri Lankan Port capacity to 3 million TEU per year. Previously there was a contract and MOU signed between Indian and Japanese investors and the Government for building the East terminal but due to local protests and political issues the same was stopped. However this plan includes Indian and Japanese investors alongside the local company John Keeles and the Sri Lankan Government.

The company is expanding its business growth and this is the reason why the company has been included into the Nifty50 of India. Recently with the exit of Shree Cements and Adani Enterprises taking over the Holcim asset of Ambuja and ACC Cements it has become a part of the Nifty 50. The company has recently achieved one more milestone with its inclusion into the top 10 most valued company’s list.