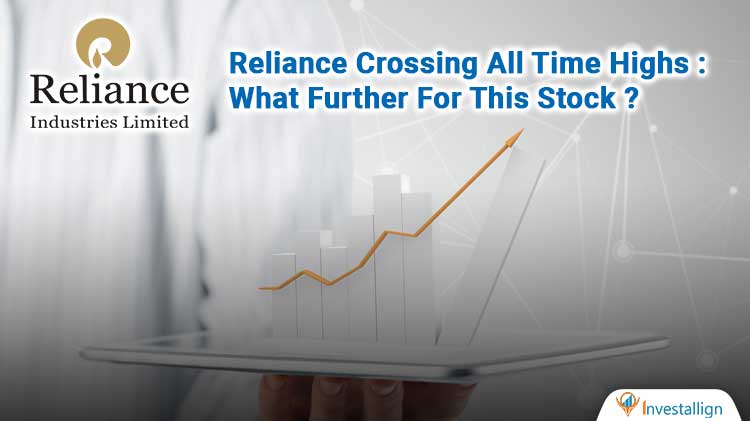 Reliance is the mammoth of the Indian Stock Market. It alone has the power to turn around the entire market direction. The proof for it is the rally from the last 2 trading days, including 6th Sept, 2021. The stock has recently achieved all time highs. The stock outperformed the market based on multiple reasons. With Reliance the scenario is not only the movement of individual shares rather it moves the entire market and the indexes with it. The investors have full faith in the company and are betting on the future of it. It is also seen as the next Apple or Amazon from India by many people.

What Made Reliance Cross the All Time Highs ?

The announcements by Mukesh Ambani in a conference were the major reasons for Reliance touching new highs. In the conference Mukesh Ambani pointed about the further vision of the conglomerate. The announcements made were from previous AGMs. The biggest announcement was regarding hydrogen costing. Mukesh Ambani aims to bring down the cost of hydrogen to 1$ per kg in the next 5 to 10 years. Along with this his previous plans for Green energy were on. He wants to build a green energy potential of Reliance industries of 100 GW by the end of this decade. Thus the giant is hurling towards its aim of gaining 10 GW per year and thus making it the biggest company to produce green energy in India by the year 2030.

The current giant in Green energy is Adani Green. However, compared to Relaince’s plan, Adani has said that its capacity would increase to 50 GW in 2030. Hence Reliance would be 2 times the size Adani Green Energy.

Along with this some time back Reliance acquired a share of Strand Life Sciences. This was an added star in the portfolio for the rise of the mammoth’s price. Connecting to Thai announcements Mukesh Ambani has set the launching date for the JIO PHONE. The phone which was in collaboration with Google has been priced at 3500 Rs. The phone targets to attract the lower income class of India. As per the vision of Reliance, this would prove to be a revenue booster in their JIO balance sheet and overall business segment as well. This is also a way of Reliance to enter the Mobile manufacturing business segment in India.

Is the Future of Reliance Industries in Trouble ?

Reliance has been considering expansion every now and then because of the government’s intention to ramp up the petrol and diesel business in the near future. The government and the world together are promoting electric vehicles and hence this would cause a major decrease in the demand for petrol and diesel. However Reliance’s major business is linked to Crude oil, but most of the business for byproducts is linked to the fuel industry. Reliance has been considering expanding in the field of telecommunication, retail and customer B2B business.

This is also the reason why Mukesh Ambani is considering Green Energy. Along with this it is now entering the Mobile Manufacturing business and bringing back Google in the field. Back then Google launched Pixel in India. However, it was not that hit for a long time. So this would be a tie up that could set the future course of Business for Reliance to compensate for the decrease in the Oil and Gas Business.

Reliance was previously stuck in a range of 1800 to 2000 Rs due to the Future Deal. Amazon struck the company for its deal and it has been on halt ever since. On the contrary the markets were not upgrading the range due to COVID fears. Hence the giant was stuck in range. However with the AGM kicking in and the deal with Aramco boosted the company’s volatility causing it to break the most decent level of resistance. The levels were marked at 2100 Rs and 2200 Rs subsequently.

The recent rally began after crossing 2300 Rs. With the announcements mentioned above Reliance increased by more than 4% in one single session. His led Sensex to cross 58000 Mark and Nifty to get over 17300. In the next session (6th Sept.), reliance showed early gains in the market opening level. However it was ploughed back at the lows. Now the stock is prevailing at 2425 Rs. The high touched by it was 2480 Rs. The highest resistance is now placed at 2500 Rs.

It was the outcome of announcements as well as the bull run going on as well. The company got a head start due to the bull run of Nifty for 1500 points in one shot with only one red zone day. The Nifty50 crossed 17400 levels today and has closed above it. Hence it can be predicted that it will open up above it only. However considering Reliance it can now settle down in this new range of 2300 to 2480 Rs. So we can expect it to be stuck in this range for sometime.