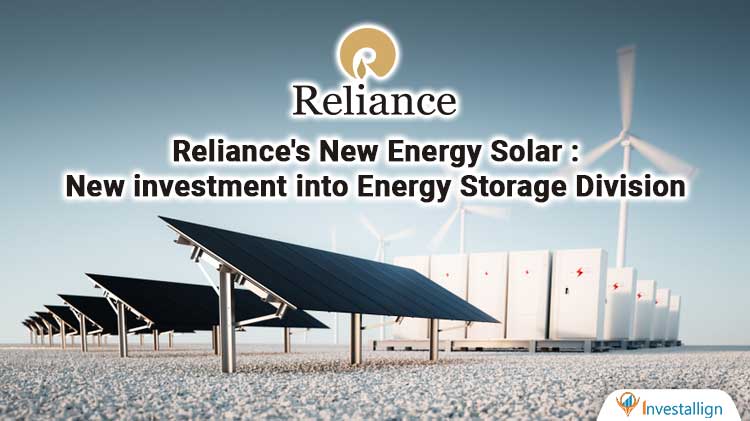 RNESL is a subsidiary of RIL and other investors like Bill Gates and Paulson and Co. The company focuses on the Solar energy segment. It is one of the major companies which will aid Mukesh Ambani’s dream of producing 100 GWH energy through Solar power plans. Recently in the AGM held the Billionaire Mukesh Ambani stated that he sees the future in electric vehicles and clean energy. He also made it clear that the land around Jamnagar owned by Reliance  will be converted into solar power plants. Not only that the land will be able to generate atlas 100 GWH of Solar Energy. This will be almost 20% of India’s capacity to produce solar energy by that time.

Through this project the billionaire is challenging the Adani Group’s Adani Green. Currently it is the largest manufacturer of solar energy in India. The annual capacity of Adani is set to ri9se to almost 50 GWH. However Mukesh Ambani has already declared a production of 100 GWH during the same period of time.

Reliance Industries has decided to invest into the energy sector on a large scale in upcoming years. Hence to support this step RIL along with some investors has approached AMBRI INC. for purchase of steak in the company. Ambri is a huge player in the segment of storage of energy. This deal will enable the company to achieve sizeable growth and invest into the upcoming expansion plans. Through the deal RNESL will get 42 Million preferred shares in the company.

Ambri is located in Massachusetts and has a patented energy storing idea and technique. Through its technology it can store energy up to 24 hours and also transfer the same as and when required. The company also says that the technique cannot be disrupted by any climatic changes. If all these is true then it will lead to a great advancement into lithium ION battery usage. This can also be used and applied into the electric vehicle segment for better and longer performance. The technology is patented and hence no one can access it until the deadline is reached. Thus by this deal RIL will get direct access to the company’s technology and its specifications.

The deal is in sync with RIL’s plans for solar energy production in India. There is one more rumor about an ongoing deal between RIL and Ambri for usage of AMBRI’s services in the domestic plans of Reliance Industries. The technology used by AMBRI doesn’t even require it to preserve its energy through air conditioning and other resources. Thus it has a completely natural and less pollutant mode of energy storage.

The company has an installed capacity to take on projects ranging from 10 MWh to 2 GWh. Thus through this Reliance would get served for its future expansion plans. Also one more specialty is that the company claims its technology won’t degrade until 20 years.

As per the history RIL has always been advanced into entering any business segment. For instance we can consider Reliance JIO. Through JIO RIL turned the entire telecom industry upside down and removed major players from the market. Also with JIO Mart and its Deal with Future Retail it is trying to penetrate deeply into the grocery and online sales business. It has also entered the gaming sector and has recently acquired the pharma online giant NETMEDS. Thus through this move there are two possible motives for the future plan of RIL.

First is obviously expanding the company’s influence and penetration across all the segments of business. One added aim is the future prospect of Electric vehicles and Solar Energy. Through the current times and situation it is quite obvious that the Government is trying to discourage people from using petrol and diesel vehicles. The rate hikes in both these products are massive. There Is almost 70% excise duty levied on them which makes them touch the skyline of 100 Rs per litre.

With this government wants to reduce the usage of petroleum based vehicles and promote electric vehicles. There is a raw market for electric vehicle companies and hence It is a perfect time for entering the segment. The company wants to deeply observe the working of AMBRI and then bring the technology to India and its widespread populated market.

Reliance wants to enter the electric segment and also supply energy through Solar mode. This will enable it to become a company with Zero Carbon print and hence attract the ESG Funds and modern investors towards it. There are multiple benefits attached to Reliance’s Deal with AMBRI. Also as per the above information there are ongoing talkies between RIL and AMBRI INC. for entering the Indian market. Hence if the deal comes through, RIL’s dream and vision for becoming a 100 GWH producing company will become possible. Not only that it will be the leader in the private segment for production of the same, leaving Adani Group behind.