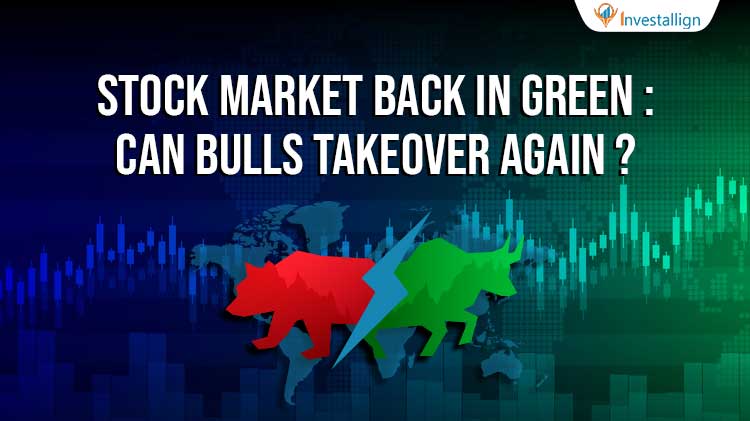 Is the Indian Equity Market back on track ? This is the question rambling in the mind of every investor nowadays. The market has been soaring continuously after the 15800 Low due to the Ukraine and Russia War. The Indian Markets were seeing a continuous downturn from 18600 Levels The markets touched those levels with a never ending bull rally of almost 1.5 Month. This gave the market a boost in momentum.

However due to the Russian War the markets cracked down and this gave the bears another chance to take hold of the market. It is always said that it takes time to grow for the stock market but the gains are wiped out in no time. This saying was proved true in this round of losses as well. The market took almost 2 months to gain its momentum and get to new highs. However it took just 2 weeks and particularly 3 consecutive sessions to take away major gains from the entire bull rally.

The entire stock market was facing panic and people have been continuously taking their money out of the Equity market and investing into Gold and Crude Oil. These commodities always shoot up in prices whenever the panic is created in the markets. Thus bearing to their nature and over demand Gold reached at 56000 Rs. in Price. This was the all time high for the commodity. On the other hand Crude oil also reached its peak of 133 Dollars per barrel. This high was noted in crude oil during the 2008 market crash. After that the Russian War has created the situation for it to touch its high again.

The current situation is way better than the situation 2 weeks back. People were suspicious if the market would lose its grip and get down to 14000 Levels again. The fear created in 15800 served as one of the most important levels during the beginning of the bull run as well. This was the level from where the bull run was initiated. Since that level was crossed, there was no looking back. However in this panic almost all the Nifty50 Stocks including the Penny and Mid caps suffered heavily. The Nifty 50 Stocks such as Bajaj Finance, Shree Cement, Ultratech Cement, TCS etc. faced major losses in valuation.

This happened when all the companies were having a good run. People were already looking for opportunities to invest in the market. For instance TCS came with its buyback at 4500 Rs. This was a milestone as the share was trailing at 3700 Rs during the announcement. Hence this created a space for 800 Rs up move for the stock. Similar opportunities were noticed in penny stocks such as R.Power, Virtual Global etc. Even the Adani stocks were carrying a good green roadshow. However at the end the losses took away all the momentum that the market had achieved.

The current market situation is filled with hope from the investors. The losses of investors are still intact. The reason is major people invested more money around 17800 Levels in Nifty50. Thus the market is looking for the remover to 18600 levels and even above that. However, running is quite a dream right now. The simple reason is the war is still not over but it was high time for FIIs to stay out of the Indian markets. As per the experts this can be a result of the FOMO rated among FIIs. The FIIs don’t want to miss out on opportunities for a possible gain in Indian Equity markets. However one can only pray if the markets catch the momentum again and rise above towards new highs.

All the stocks that took the hit from all time highs are recovering. For instance Ultratech Cement touched 5650 Rs. from it high above 7000 Rs. The stock is currently in the range of 6200 Rs. Even Shree Cements was down to 21800 Levels from 30000 Rs. The stock is recovering steadily at 23800 Rs.

Similarly Adani Group, Reliance Industries and Bajaj Brothers are keeping up with their steady run. Hence whoever has invested into the mates around 16000 Levels has achieved significant gains right now. Even people who were caught up in the Russia Ukraine situation and lost a major chunk of their investment profits, have been recovering steadily.

The most positive news that the Indian markets could think of is FIIs green zone. In other words FIIs have started buying in Indian Markets after a long time. This event can be taken as a sign for a possible start of a bull run. For a major time period the FIIs were ditching the global and Indian markets to stay away from trailing situations. However now the investments have started flowing in and the market is expected to recover on its demand mechanism