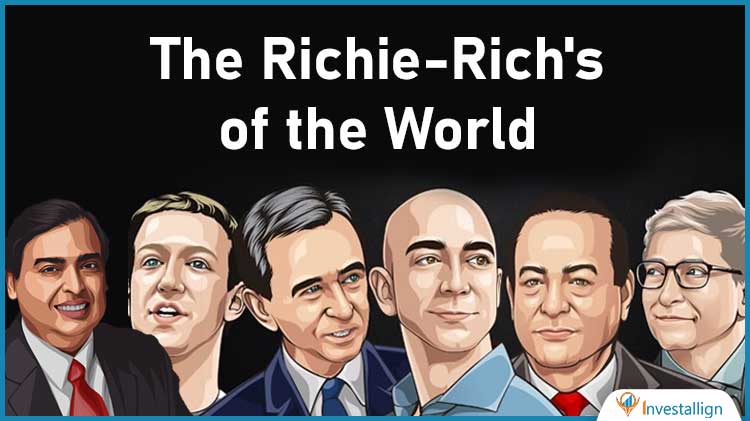 2020-21 has noticed an upscale in billionaires across the world. The number now comes to more than 2100. The billionaires amount for 8 trillion Dollars in the entire world. Among them the Top 10 hold more than 1200 billion dollars. The top list has been under constant change in the last 2 years. The list for top 20 consists of 2 Indian Business tycoons. They are Mukesh Ambani and Gautam Adani. The top 10 involves Mukesh Ambani and his Family. The Net worth of Gautam Adani increased the most in the previous year. He beats Jeff Bezos and Elon Musk in the wealth increasing list in 2020. This is the result of constant rise in the listed companies of Adani Group of Companies.

Let’s consider the top Richie Richs of the world in current times below :-

He is the real example of struggle and innovation in current times. He began his business from the garage. His photo with Amazon graffiti on the wall is famous as well. Bezos owns 11% stake in his Amazon business. His estimated net worth is 187.90 Billion Dollars. He is based in the United States. The business venture of Amazon initiated with online selling books. The idea was rejected by many people but Bezos was firm to proceed with it.

The France richie is the owner of the world’s most luxurious brand of goods. The brand is Louis Vuitton. The LVMH’s holding company is Christian Dior. Arnault holds almost 41.2% in Dior and 6.2% of LVMH. He has almost 5 billion dollars in cash. The net worth of Bernard equals 184 billion dollars. He recently overtook the 2nd position from Elon Musk.

Arnault was the heir of his father’s construction business. He was the chair of the company for almost 6 years and then he bought luxury brand Financiere Agache. With this buying he strategised his luxury brand and chopped off all the companies except Dior and Le Bon Marche. Later on he became the major shareholder and CEO of LVMH.

Musk currently holds the third position in the list of Richies. He is the modern icon everyone keeps an eye on. The most eyes lie on his tweets after all ! Yes, Musk is famous nowadays not because of his amazing SpaceX explorations and progress but because of his Cryptocurrency tweets. One Tweet from Musk and the Crypto Prices dangle at length. He was also involved in inflating prices of many other companies such as Signal.

The Net Worth of Musk is 155 Billion Dollars. He was recently taken down from his 2nd position by Bernard Arnault. Musk is a real time entrepreneur. He turned around the entire TESLA Company and started PAYPAL. He also started the Boring Company and SpaceX. Musk also manages Neuralink. It works for the people suffering from Paralysis so that they can communicate mentally with others.

Gates founded the biggest software company in the world. He and his friend Allen went to Harvard together. In the first year they founded Microsoft and dropped from the University. Gates owns almost 1.3% stake in Microsoft. Gates owns 125 billion dollars as his net worth.

He has assets in multiple companies and is highly invested into the markets. Gates also got a chair in Berkshire Hathaway. He later left Berkshire and stepped down. He is very close to Warren Buffet who is one of the people in the list of Richies. Gates left the Microsoft board in 2020. He runs two NGOs along with his ex-wife Melinda Gates.

Zuckerberg is the man responsible for the increased social media attention across the world. He is the creator of Facebook.  He owns 13% stake in it. In recent times Facebook acquired Whatsapp and Instagram. Whatsapp is the most preferred chatting application in India. Instagram is the prime online handle for youths in current times. Facebook is the maximum utilized and populated social media website in the world.

Zuckerberg’s net worth is approximately 115 billion dollars. Zuckerberg runs an NGO with his wife Chan.

He is the mastermind of the stock market. Buffett is the co-founder of Berkshire Hathaway. He owns more than 38% share in it. One share of Berkshire Hathaway is worth almost 430000 Dollars. Buffett believes in making money slowly. He is a pure investor and advises everyone to pick quality stocks and have patience. Warren Buffett’s net worth is close to 109 Billion dollars.

Buffett and Gates share a very strong bond. It was due to this and that Buffett donated almost 40 billion dollars to Gates’s NGO. Some of his best purchases are Coca-Cola, Bank Of America, Apple, IBM and many more.

The list further extends to Larry Allison, Larry Page, Sergey Brin and Amancio Ortega. Previously this year Mukesh Ambani moved up to this list at 5th position but due to the fight between Amazon and Future Retail, Reliance’s share price tanked by almost 500 Rs from its high. Right now Mukesh Ambani Comes at 12th position with a net worth of 79 Billion Dollars. Also Gautam Adani stands at 16th position with 68 billion dollars. He has overtaken Zhong Shanshan to be the second Richest Asian.