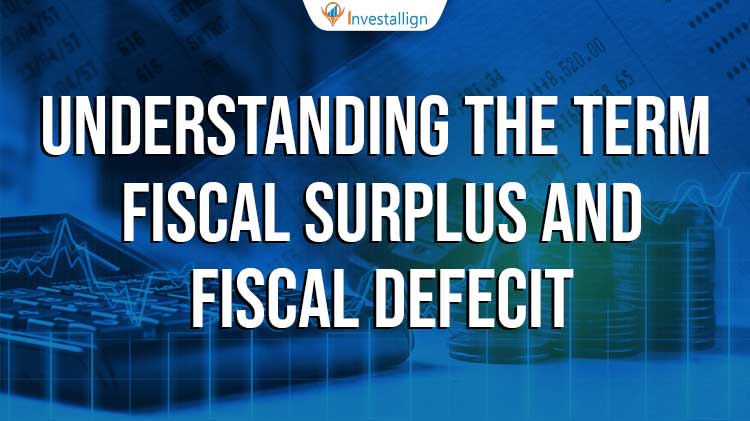 Fiscal surplus and Fiscal Deficit are two sides of the same coin. Both of these terms co-exist in an economy. The sum of incomes and expenses done by a nation through a quarter and on a more accurate basis a  year, decide whether the nation has fiscal surplus or fiscal deficit.

Fiscal surplus is defined as a nation’s expenses being less than its income. In other words the nation is profitable from its trade and production. Fiscal deficit on the other hand is every nation’s nightmare. The term describes a situation where the income is less than the expenses incurred by a nation.

Fiscal Surplus is a terminology which does not exist in most economies. The reason is most governments want to reinvest their money for expansion purposes. However in return of that investment they cannot generate tax equivalent to the spending so they experience a deficit. However there are still certain economies that generate more revenue in comparison to their expenditure. Germany, Switzerland, Sweden, Norway etc. are some nations with a fiscal surplus. They have achieved such a stage after balancing their spending over years and generating more revenue from their investments.

It sounds like having a fiscal surplus is always beneficial. However it has its own challenges. The countries with a budget surplus can experience deflation frequently, In other words they experience a price decrease in goods and services more often. It is said that inflation is the sign of a growing economy or inflation in simpler terms is good for an economy. The reason is it pushes the economy to achieve a higher potential by increasing the prices of goods and services. However deflation is not good as it drags the economy back to a lower level.

Surplus and its Usage

The surplus achieved by the government is useful in development of local infrastructure and trade facilities. It is also useful to reduce the taxes levied on local people. The economies can also initiate new subsidies or programmes to develop the business activities. The nation achieving surplus can also improve the expenditure on healthcare and education. All such investments can be fruitful for the economy in the long run. With a surplus new technology can be installed resulting in reduction of costs and hence improving the surplus ahead.

However for the governments worldwide it is not necessary to keep a balance sheet filled with budget surplus. Most countries try to maintain deficits and still are advancing in economic growth. For instance, the USA follows a fiscal deficit pattern and achieves growth. In 2021 the US accounted for a budgetary deficit of 2.8 Trillion Dollars.

One might think that having a deficit is not good for an economy. Well it’s not always that case. Once a deficit is created inflation happens in an economy. However inflation is good for an economy under some limits. It helps the goods and services to be fairly priced. When the inflation goes above a certain level the government cuts down the expenditure of the economy by increasing rates of loans. The same situation has happened in recent times. The RBI has increased the rates by 0.90 basis points. This means the rate has gone up from 4% to 4.90%. This has a direct impact on loan disbursement from the banks. Hence cutting down the spending and controlling inflation.

However Fiscal Deficit is a normal practice in even developed nations. For Instance as mentioned earlier, the US experienced a fiscal deficit of more than 2.8 Trillion Dollars in 2021. Even many economically strong and growing nations like India, China, Japan etc. face fiscal deficit now and then. As per an estimation the Fiscal Deficit of China would be close to 3.37 trillion dollars in 2022. Japan’s Fiscal deficit in 2022 will be at 22.17 trillion Yen. Hence the higher fiscal deficit does not mean that the country is under pressure or in a loss making zone. It also means that the country is trying to expand itself.

To cover the deficit the countries borrow money from other countries or banks or international organizations. This way the entire economy stays in balance. Hence Fiscal deficit and fiscal surplus are two sides of a coin. They both co-exist in the world across the economies. It depends on the economy’s spending whether it would experience a fiscal deficit or surplus.