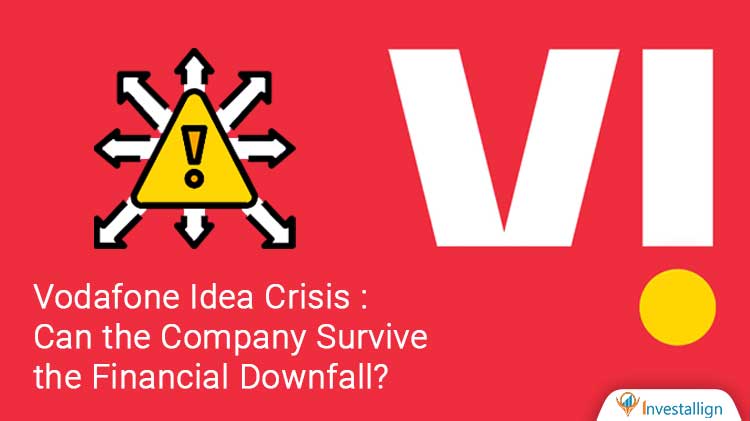 Vodafone Idea is a merger between Vodafone Global and the telecom arm of Kumar Mangalam Birla (Idea). The companies tied knot in 2017 with a 23 Billion Dollar deal. This made both of them the biggest telecom company in India. The company has been constantly thriving under losses. The reason is an increase in constant interest payments. The investors also constantly pressurize the company’s board for repayment of money. The questions regarding the financial abilities of the company have come into picture since the company announced its losses for June 2021 at 7022 Crore Rs. The total debt for the company stands at 1.8 Lakh Crore Rs. The EBITDA stands at 4400 Crore Rs. This amount is also a decrease in the operational functions by 200 Crore Rs. Hence the company is constantly under pressure from its investors.

Why Did Vodafone Idea Crumble ?

The Vodafone Idea fall started when JIO was introduced in the Indian markets. The company had recently tied up knot and amidst the heavy interest payments, Reliance launched JIO with Free Internet and calling facilities. This made the telecom companies get elimination tickets from Indian Markets. Aout of all the companies serving India only three survived namely – Airtel, Vodafone Idea and JIO. All of this was the result of Free internet facilities provided by JIO.

The superb strategy of Mukesh Ambani rattled the newly formed Vodafone Idea alliance. The reason is the new foundation took a lot of loans from multiple banks. Also with the spectrum dues kicking in and the surprising AGR dues every telecom company had legal battles going on with the government. The companies alleged mentioned that the calculation done by the department of telecommunications were wrong and that the due as need to be revised. Also there was a huge gap in the calculation of AGR from DOT and Company’s point of view.

However the AGR factor and the spectrum dues have made the telecom companies fierce. In case of Vodafone Idea the spectrum dues need to be paid in installments starting from April 2022. Thus Competition from JIO and The dues from banks and AGR have kicked the company’s goodwill and reputation. With this the interest payments have made the profits run away from the balance sheets and the company is constantly reeling from heavy losses year on year.

The company stated in its recent reports that it is not sure about its going concern capacity. The reason is the survival of the company is totally dependent on investors’ money right now. If the investors do not invest more in the company then the operational abilities cannot function at all. Thus the material aspect is the major factor deciding the going concern in Vodafone Idea’s scenario.

Out of the creditor list, there are multiple banks involved. The major ones are from SBI, IDFC bank, IndusInd Bank and Yes Bank. The combined dues form all the banks stand at 28500 Crore Rs. The highest creditor for VI is SBI at 11000 Crore Rs. Also SBI has taken the initiative to conduct talks to the company on behalf of all the banks and has also reported to the Finance Ministry regarding the issue. The bank stated that if the company is not able to pay interest then the banks cannot extend the line of credit consistently. At the current situation no one wants to invest more into Vodafone Idea due to its debt mountain.

Why is the Vodafone Idea Needed ?

The major reason why the government still wants the company to accelerate its operations is the denial or unacceptance of duopoly in the telecom sector. JIO and Airtel are both the companies who are doing well on their balance sheets and market share. The ARPU is increasing and constant improvement is noticed in Airtel’s viability. However the VI debt is increasing which has given rise to oppositions in further funding rounds.

The government is aware that if the duopoly market is established in India then there would be a high chance of exploitation of customers.

Vodafone Idea knows this and is taking advantage of it. The company is constantly threatening the government. If the dues are not withdrawn or lowered then it has no option but to go for liquidation. The current situation is such that already the company has losses accounting for 1.8 Lakh Crore Rs and if it goes under liquidation then the Government bank (SBI) and its other agencies will take a major hit. The Spectrum dues of Vodafone Idea stand at 94220 Crore Rs and the AGR dues stand at 58000 Crore Rs. Hence the government has multiple interests in Vodafone Idea’s constant run – Denying chances for Duopoly and High losses if the company goes into liquidation.

The company’s ARPU is also decreasing from 123 to 107 in current reports. However the losses have been down to 44000 Crore Rs from 73000 Crore Rs in previous financial year but the operational profit decrease of 200 Crore Rs is a red signal for the company. In current times it is needed that the company widens its market exposure and market share with new marketing schemes and hence capitalize on the upcoming chances of internet revolution in India.