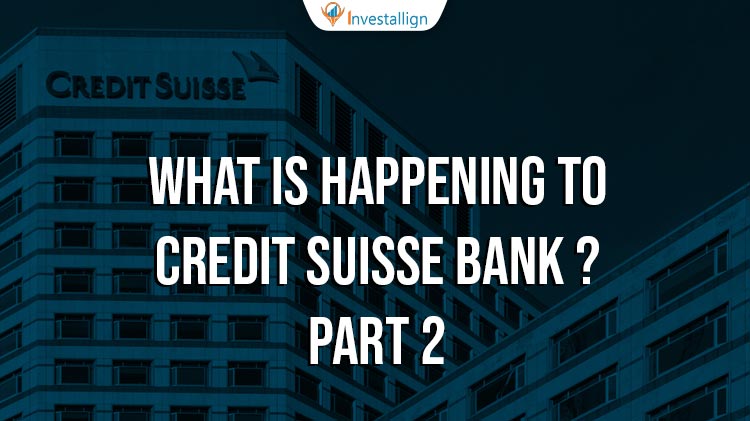 As understood earlier credit default swap is a process where the insurance company safeguards the money of investors by charging a little amount of fees from them in exchange of their bond security is called credit default swap. Being an insurer the company has many such people under its portfolio and the Adani company would be paying back some people out of the entire cluster. Thus by analysing the risk the insurance company would ensure the investor’s money and the profit of the company would be the interest amount earned from those who have got their money back from the Adani company itself.

How is Credit Default Swap Applicable in Credit Suisse Case ?

The credit Default swap ratio is 278.19 (basis points). Well how is this harmful for the bank ? For that we have to visit the 2008 Lehman Brothers Case. In the 2008 financial crisis the entire market was down due to the loan defaults. Well let’s understand the scenario in depth. The situation in 2008 USA was such that a lot of people wanted to buy homes and the banks were willing to give out loans to them.

So if 5 people wanted a loan of 200K dollars each, the banks were willing to give money but they would not spend their money directly. In such a scenario there would be a person named X who has given his money to the bank to earn some extra interest. Thus lets say Mr. X wants to lend 1 Million Dollars and he gives the same to the bank and the bank would pay him 3% interest.

So in such a case the ban would charge 6% of the interest from people and would be liable to pay 3% of the same to Mr. X and hence making 3% money directly from people without any investment. In this case as well the banks would ensure their money like Mukesh Did in the first part. These banks would reach out to insurance companies and give them a 1% fee for ensuring their money from the borrowers. The insurance company would take 1% of the fee and ensure a group of borrowers collectively the insurance company would also make profits. So this means that the banks would pay 10000 dollars for ensuring 1 Million Dollars.

With increased demand more houses were built but suddenly due to extreme high no. of houses then needed the valuation of houses went down, Rent coming from the same went down and the loan defaulting started. Well if the loan was defaulted by borrowers then the banks would get the same from the insurance companies. But because of insuring huge amounts for just 1% fee the insurance companies became unable to give money back and in this scenario the Credit Default swap ratio comes into picture. These insurance companies having so much credit against just minor interest fees had a boosted credit default swap ratio. For instance the Lehman brothers had a credit default Swap ratio of 250 (basis points) and this was the point after which the entire market fell due to the 2008 financial crisis.

Thus the same situation can repeat itself is the fear created due to such a high credit default swap ratio of Credit Suisse bank.

What Does this Mean ?

The ratio indicates that like homebuyers in 2008 took huge amounts of loans, the businesses and people have taken huge amounts of loans and bonds and have ensured them with insurance companies like Credit Suisse. Thus the increasing CDS means that the risk on the side of the insurance companies has gone up by a large extent. Not only this the share prices of Lehman brothers went down by huge amount post the CDS hit and the same case is happening with Credit Suisse due to its CDS ratio. Adding to this the external factors are affecting the situation to an even huge extent. The Russia and Ukraine war is going to the next level.

The electricity prices in the U.K are up by 175% and the Pound’s valuation is depreciating heavily. Also the business in Europe and the U.K is going down slowly. Hence this could trigger the extreme end of credit Suisse if the assumptions add up to the Credit Suisse situation. Also the bank has been going through a dry spell of profits so it does ot have enough money to support itself if the situation worsens. So the entire situation has been highly under examination since quite a long time. However the exact outcome of this situation could be only seen in the upcoming time.