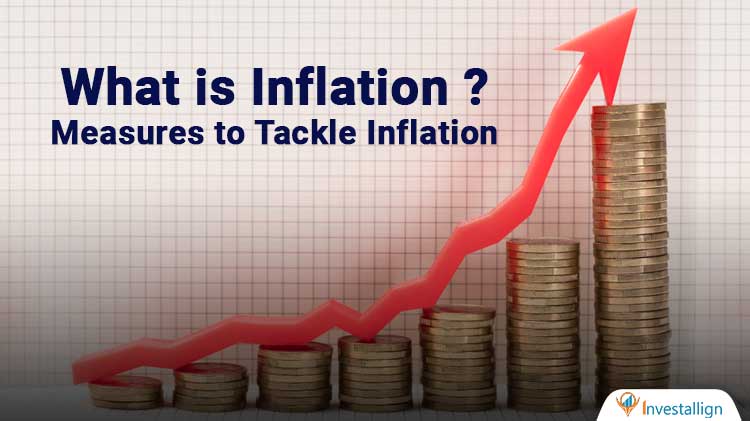 Inflation is a very complex procedure wherein the purchasing power of money decreases with time. In other words when the price of any goods or services increases with time it becomes more costly than it was before. On the other hand the value of money still remains the same. Hence in the same amount of money now lesser goods or services will be available which is a decrease in valuation of money over time. This is called Inflation. This is the reason why it is very important to keep increasing the return on the money earned.

The inflation effect hence decreases the value of money and hence it is required to keep earning from the money saved. This is the reason why money in a bank’s savings A/c is also given interest rate. This is to attract customers with an increase in their money valuation and tackling the inflation as well.

Theoretically there are three types of inflation. Stagflation, Hyperinflation and Deflation.

Under this type of inflation the rate is definitive. The average increase in inflation is 2 to 3%. Any more increase in inflation beyond this is known as hyperinflation. This can be problematic for people who solely rely on their earnings from savings A/c Interest and other modes such as F.D. rates given by banks. Thus the earning from the bank rates is lower than the increased inflation rate. So annually the money value held by individuals with banks decreases.

It is a situation wherein the inflation rate decreases in comparison to the rates in the preceding year. However good this seems for the consumers in the short run, it is not a good sign for any economy. The reason is the companies selling goods in large quantities have less profits due to the same and hence they would curtail their production which leads to unemployment. Thus bringing the economy back but such a derailment takes a longer time to get healed.

Inflation has a very bad effect on the end users and hence they need to keep earning from it. The most safest mode of earning is through Savings A/c. Such accounts give away a return of close to 2.75% every year. On compounding it comes closer to 3.3%. This is a fair return given the inflation rate’s range between 2 to 3%. However this is a loss for the account holders as they won’t be able to capitalise ad earn their savings. Thus the same amount of money would be remaining at the end of the year without any benefit of interest received. Where on other hand they could have the opportunity to invest into safe securities and earn more.

There are various Funds and Bonds available in the market which give you the benefit of inflation. In other words they protect you against inflation and give you a certain rise in the money invested. They provide a return of an average 4 to 5%. Such funds are available widely in the open market and their specific purpose is to protect money against inflation and to provide better returns than savings A/c.

This is one of the best investments if the liquidity is not a concern. Such investment is locked up for 15 years with the bank. Given the lockup period, a person gets a return of close to 7.15% every year. This is a great return but there’s only one downside to it. The returns and the investment is locked in for 15 years. One can only redeem the amount deposited once this period is over.

Investing into equities and bonds in a ratio of 60:40 is also the best way to tackle inflation. In the longer term the market is set to be blooming. Also to keep a safe track of investments bond investments in parallel proportion is made. Such strategy has been used by multiple users over time and it has worked out well on every 5 year average return.

REITs are the new modes of investments. They are like a pool of mutual funds invested for development of real estate properties. Such funds also work on returns and profit sharing basis. The proportion is based on the amount invested.

Gold on other hand is the safest mode of investment. The returns on gold are considered safe and valuable as well. The valuation of gold has been rising a lot lately. In this year only the prices of gold increased by more than 10000 Rs. Thus it is one of the safest assets to invest in to beat inflation.