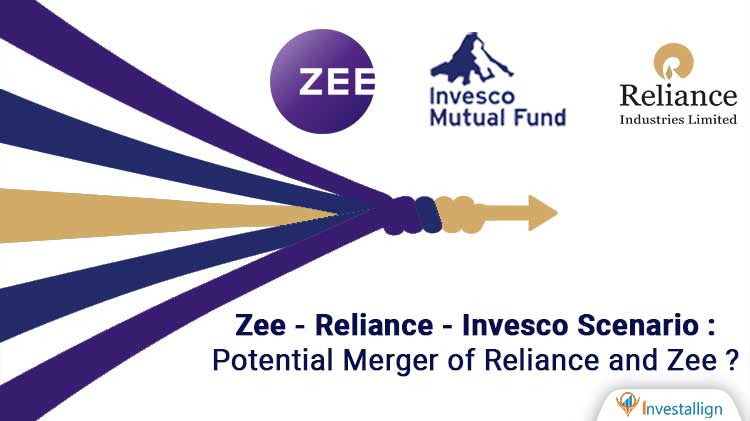 Zee Entertainment has been into a lot of headlines lately. Similar is the case of Reliance Industries. The major reason for Zee was its merger with Sony Entertainment. The Zee valuation has been rising since the election of the new CEO and the company. The company has been on the maturity stage to again begin its uptrend. This is not a surprising event where Reliance is buying companies that are seen as potential breakouts. The recent purchases of Reliance seem very interesting as they not only diversify its product portfolio but also provide a new income stream with an increased boost.

The current scenario is not a small corporate war but rather it is a big attempt of removing the current promoters and setting up a new board. The Invesco Group holds 17.88% stake in the Zee group and is eyeing to shuffle the board so that it can decide the future for the Zee Company ahead. In its way are the promoters of the company Punit Goenka and Family. The company has been almost on the verge of getting large inflows from investors and a better future after a row of low valuation. In the meantime the Invesco Group has approached Reliance to Buy the stake in the company so that it can achieve its targets.

Post the Zee-Sony Merger the Invesco group has been eyeing the terms of the merger. The terms say that Punit Goenka would receive a 4% stake in the company in form of ESOPs and the promoters will get 3.99% of stake in the Merged Company. However this will give the promoter group more holding and expose Invesco to future problems. Hence it wants to take down the Promoter group and set up a new board. This was the statement presented by Punit Goenka.

However the Invesco group disagrees with this claim. The group states that it is just a mediator for the stake sale coming through merger. It has not directly gone to Reliance Board and broke any ethical terms of ownership. The Invesco Group Says that Reliance is trying to settle a deal with Zee so that the company can get additional inflow and everyone benefits from the same. However the Promoter Group of Goenka deviates from this point.

Punit Goenka said that the Invesco Group wants to remove him from the CEO position and two more members from board and set in three independent directors. The group this way wants to run the company to its future course. However interesting this idea seems, it is not good for the longer term as per the Goenkas.

As per the shareholders this is a very hard situation for the company as its internal members are on a street fight. This can either result in a hostile takeover or a bad corporate war at the end. However it seems to be hurtful for the company in the short term.

Reliance first of all did not reply to any questions regarding the deal until 13th October. The group agreed that it is interested in buying the stake in the company and has also offered fair price for the same. But it does not want to get dragged into any more corporate controversies as its plate is full with Future Retail Case. The company sees a future partnership in the Zee Entertainment but it does not want to initiate a war on any fronts.

The Invesco group went ahead to the Reliance Group and settled a few terms for the merger without consulting the CEO and Board. Later on it came in with the offer of buying. This is a serious issue as a major promoter cannot indulge into such deals without the consent of the board and CEO. With this merger the Reliance Group would be summed up to add 14000 Crore Rs into the capital flow of the company.

As per Invesco this is a great deal with a few obstacles in present but better fruits in future. The deal will benefit the investors and shareholders at large due to increased liquidity and better expansion plans. Also the Invesco Group indirectly mentioned that the current leadership of the company is not apt and this could divulge the Group’s future performance.

The Invesco Group has filed for this case in the NCLT. The major reason for this is the pushing back of EGM from the CEO. Punit Goenka believes that he was not aware of this situation and hence he will not allow an EGM without studying this situation. As per the Invesco group this is a false accusation as the Goenkas were encouraged to carry out this deal. As per the reports from Invesco the CEO is postponing the EGM so that the voting is not carried out soon and the Board can come ahead with a better proposal for the future of the company.