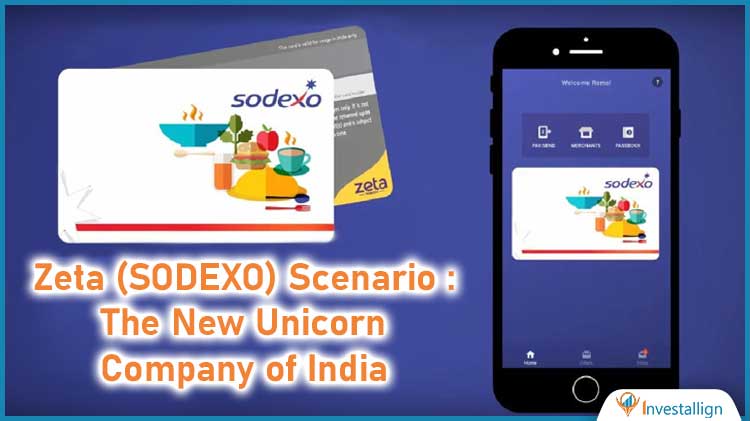 Zeta is recognized nowadays by the name of Zeta Sodexo. The fact is Sodexo is a partner or investment hand and Zeta is the main company. The parent company for it is Directi. The company is not into the meal business, rather it is a modern banking tech company. It provides the software and technology for banks to perform smooth functions regarding issuance of various cards and prepaid products. Thus it aids the banks into successfully running the corporate and retail technology induced finance products.

Zeta was originally started by Bhavin Turakhia with a view to modernize the banking services provided online. He aims to revolutionize the banking industry with mobile application based programs. Zeta aims to transform the system from the old fintech softwares like Flexcube and Finacle towards mobile application usage. The aim is to help the customers get the benefit of tracking their expenses and applying for loans without any hassle.

Right now Zeta earns its major part from the deal and investment with SODEXO BRS. The company initiated its business with SODEXO in 2016. With 60 Million dollars of investment Zeta began the meal pass application ZETA SODEXO. The application is designed to provide employees with tax benefits by utilizing the taxable amount into food allowance.

Zeta recently cracked the unicorn list of India. It received 250 Million Dollars of investment from Softbank. Now the company’s net worth is 1.3 Billion dollars.

ZETA and The New Changes

With the Softbank deal Zeta has now entered the unicorn league in India. It will not only be more credible due to Softbank’s investment but will also get access to the huge business associated with Softbank’s other clients in North America and Asia.

Zeta is in talks with Indian banks to access their ZETA technology that it uses with SODEXO. This will enable employees to track their expenses well and also allow multiple facilities associated with cards and spending all at one stop. The company has already initiated its working with IDFC bank and RBL Bank.

Right now Zeta earns a maximum chunk of its revenue from SODEXO business. But it wants to diversify its earnings. Thus focusing on cloud programming and other business products. With the initiating talk with many clients Zeta aims to get a minimum of 200 to 300 million dollars of revenue in next 5 years.

Zeta is providing services to banks with rewriting the entire stack of business from scratch. It has done the same with its existing customers. It will provide the entire information associated with not only banking transactions or payment system or mobile accessibility but the entire working and processing for the customers.

Thus Zeta is looking to modernize its business and spread its product line. It wasn’t to be the market leader with its SOdexo affiliation and also wants to expand in multiple countries to get the benefits to diversified class of customers.

Sodexo is a company from France and has had its affiliation with ZETA since 2016. Their business is to provide the meal benefits along with other fuel and shopping benefits to employees under one card. One would think how could this company even make money ? They are just offering money to employees in place of hard money. Let’s understand the entire cycle.

The cycle of the Sodexo company begins from meeting companies and offering their services to their employees. The companies select such companies because they provide them with employee benefit schemes and also save the tax. The SODEXO is placed under the Government’s company list of Prepaid Payment Instruments. This is a legal way of saving tax and the companies like SOdexo take benefit of the same.

The companies provide cash to SOdexo ZETA and in place of it gets coupons with the same amount of cash. In today’s time the same is received on ZETA applications in the form of a meal pass. Now the cash with SODEXO company goes into their escrow account with their registered bank.

The employees get access to these coupons based on the food allowance amount they are entitled to. Now the employees spend these coupons for buying things from shops that are registered with SODEXO ZETA. The merchants accumulate these coupons and return them to SODEXO and get cash in return. This is how the cycle works.

Now one would think what does the SODEXO ZETA earn from it. They get commission from Companies who get the coupons and Merchants as well. The companies provide with commission because they get free from the burden of providing such money to employees and keeping a track of its movement and then enhancing the same from the merchants. Hence ZETA SODEXO provides solutions to the companies. The merchants would pay due to their increased rate of customers.

Why Does Govt. Approve this Cycle ?

The government allows this tax saving scheme because it boosts the customer saving, the reason is these meal passes have an expiry date to use the money and also a capped limit on the cards for amount storage. SO employees have to spend the money to get the benefit of the same. Thus it increases the spending of citizens (employees) and hence boosts the GDP at the end of the entire cycle.

This is currently the main income stream of ZETA. however it is planning on expansion.