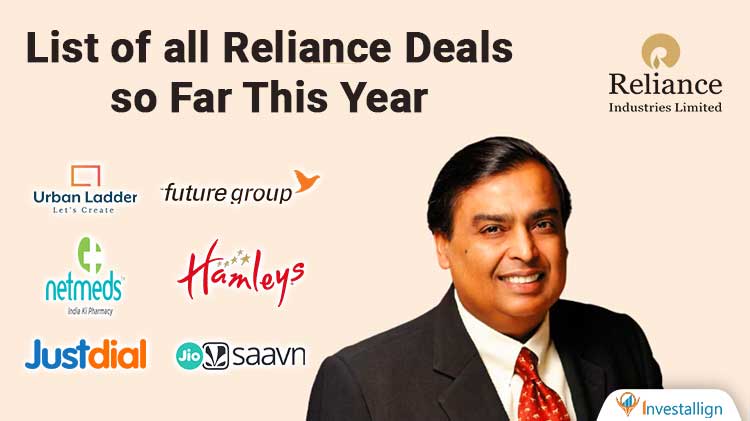 The Oil to Cloth Conglomerate is the most valued firm of India. The Company has the highest Market capitalization and owns multiple businesses across various business segments. This year has been a base setter for Reliance for its forthcoming future. In other words Reliance has been constantly investing into companies that it thinks would capture the future market and demand. The Company has been on an acquiring drive so far. This year it has made a lot of partnership deals, mergers and acquisitions to make its business diversification strong. The Portfolio of Reliance has witnessed a great upscale due to the inclusion of various companies such as Just Dial, Hamleys, Urban Ladder etc. to its business.

This way the company has successfully managed to capture multiple ripe businesses which were around their break even point or on the verge of getting a major breakout. The best part on Reliance’s side is that the company is a net debt free conglomerate. This not only proves its liquidity strength but also proves how much it is capable of investing into multiple businesses for expansion at the same time. This is the major reason for all such acquisitions. Reliance is planning to invest into Green energy, Gaming, Entertainment, Health, Data etc. As per the company this is the future of the Indian Business Segment.

The latest Deal includes the investment into the Green Energy Segment. Along with this the list includes Netmeds, Urban Ladder, Hamleys etc. Lets Decode the Reliance Acquisition Trail.

The first acquisition under the green energy segment was REC Holdings. The company was taken over due to its 75000 Crore Rs project of Green Energy Development. REC Holdings is a Norway Based firm which runs a Clean and affordable Solar power drive. The company initiated its operations in 1996.

The latest acquisition under the Green energy drive is 40% stake in Sterling and Wilson Solar Limited. The company provides sustainable modes for energy production in 25+ countries. It has an employee base of 8000+ people with a total of eight business verticals.

Reliance has been active into its retail chain nowadays. The company has taken initiative to open 7 Eleven into such a segment. Seven Eleven is a 24/7 Store which has its roots in Texas. The company is a retail chain of convenience stores with more than 71000 Locations active today. Reliance is bringing this giant in India from its dealings with Japan Seven Eleven Company Limited.

Future Retail and Reliance was one of the biggest deals in Reliance’s history. However due to the intervention of Amazon in it the deal is at a halt. But the NCLT and Courts of law are trying to settle the dispute as soon as possible so that no business is harmed and the companies keep on running efficiently.

Yes, Reliance has extended its conglomerate into the Kid section as well. The giant acquired British Toy retailer Hamleys for 620 Crore Rs. The deal was unique as it was an all cash deal. This deal is quite old than the others, however the Henry into the Kid’s toy selling was a unique tactic from the Reliance Group.

This deal is yet not done. However this would give Reliance a load of liquidity to process further into its Green Energy Mission. The company has been eyeing to get a 20% stake in Reliance. This deal is supposed to be a stock deal and the Saudi Aramco will acquire 20% stake in the entire Reliance Industries.

Reliance has been very active in creating the online JIOMART for every consumer in India. The company firstly expanded its physical presence across the nation. Then it focused on the concentric areas and started the JIO MART ONLINE facilities. This has given the company a strong market place. JIOMART has now been a tough competitor for Amazon and D-Mart in the Indian Domain.

JIO has been a game changer for the Mukesh Ambani led Reliance Industries. The company has been always into discussions due to its planning to capture the market. Though this is a very big deal, the expansion under JIO is quite humongous. The initiation of JIO MART, Whatsapp Payments, SET TOP Boxes, WIFI Facilities and many more has been a perfect example of how JIO is trying to capitalize each and every opportunity in the market.

It is visible that in the further time frame, Data will be the leader in the market. This is the reason why Reliance acquired Just Dial. This company has information on almost each and every major and small business person or leads to accomplish various tasks. Hence acquiring it would provide Reliance with data that can be used to capitalize from its other companies such as JIO.

Reliance recently took a major share in NETMEDS and URBAN LADDER. NETMEDS is an online pharmacy with competitors such as 5mg, Pharmeasy etc. The company was acquired by Reliance this year itself. On the other hand the Urban Ladder, which is an online furniture company was also acquired by Reliance with just a 180 Crore Rs deal. This is due to the struggling financials of Urban Ladder so far.

However it is clear that reliance has been acting like a hawk in the Indian marketplace. It sets eyes on a segment and poaches the ripe companies to expand them and benefit from them in the longer run. Thus the future of Reliance is getting its roots since the last two years continuously.